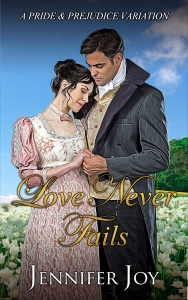 It seems almost impossible, but it was only one year ago that Jennifer Joy launched her debut book Darcy’s Ultimatum from The Cousin Series.

Ever since she has been unstoppable releasing the other 2 books from the series: Anne’s Adversity and Col. Fitzwilliam’s Challenge and the stand alones Earning Darcy’s Trust (my favorite until this moment), Accusing Elizabeth and now Love Never Fails.

To celebrate her latest release, Jennifer Joy is bringing to From Pemberley to Milton an excerpt of Love Never Fails and a giveaway of 4 e-books.

I hope you enjoy the excerpt (it’s one of my favorite moments in the book) and take the opportunity to win one copy of Love Never Fails.

She looked around again, hoping that a carriage might cross their path. A carriage would be the best way to convey her to Uncle Phillips’ and then home. Merely thinking of her ankle made it throb all the more. Very well then, she would have to forgo her trip to Uncle. She punched the ground next to her again. Father’s books would be gone by the time she could get to him.

Mr. Darcy held his extended hand out steadily, with no flinch of indecision. His expression inspired trust. He seemed to be just as embarrassed as she was, judging from the blush across his cheeks.

Taking his hand, she let him pull her up to stand on one foot. She hopped a few times to gain her balance, refusing to take his arm until her sensibility overcame her pride. Several preferable circumstances popped into her mind in which she would be proud to take his arm, but she dreaded for him to think her feeble. She did not know Mr. Darcy very well, but she knew enough about him to know that he was not weak. Nor would he appreciate weakness in others.

She looked between him and his horse, her voice trembling despite herself. “How do you intend to return me to Longbourn?” Please let it not be by horse… She held her breath.

“You shall ride my horse.”

Attempting to disguise her panic with humor, she said, “That brute that nearly knocked me over?”

In a tone similar to her own, he responded, “Would you rather I carry you?”

“Yes!” she wished to say wholeheartedly, but she swallowed hard instead. “I understand your predicament, Mr. Darcy, and I thank you for your gentlemanly manners toward me. But…,” she inhaled. “I have not sat on top of a horse these ten years,” she said in a rush through her exhale.

Mr. Darcy turned in order to stare at her more directly. “Ten years? How is that possible?” The astonishment covering his handsome features made her smile to minimize her own ridiculousness.

In one final attempt she tried to put her foot down and was deeply sorry she did. Groaning in pain as the blood rushed to pulsate in her ankle, she doubled over at the waist while clinging to Mr. Darcy’s arm for support.

“I fear I have no choice in the matter today,” she said, straightening up after the initial jolt turned into a steady throb. How she wished he would wrap his cool hands around it as he had earlier. His touch had sent chills up her limbs until she felt as if her hair stood on end. The memory of it made her reach up to smooth her coiffure.

Hopping toward the horse, her jaw tensing with every inch she drew closer to the saddle, she looked up at the stirrup. It looked so high, it seemed to be an impossible task to get up in the saddle. Why did gentlemen prefer such tall mounts? How on earth was she supposed to get up there? Why could they not ride ponies?

Looking up at Mr. Darcy, who stood head and shoulders above her, she nearly laughed at the image in her mind of his long legs touching the ground as he sat astride a pony.

“Is there something you find amusing, Miss Bennet?” he asked. Was he teasing her? She could not read his expression.

What had she to lose? Without a doubt, he must think her one of the most ridiculous women of his acquaintance. “I was wondering how I am supposed to get up there.” She nudged her chin in the direction of the saddle. “And I was wishing that you had arrived riding on a pony so that I might have a chance of keeping my dignity intact while mounting.”

His lips curled up on one side, revealing an appreciation for her odd sense of humor. “If only you knew, you would not tease me so.”

With a deft swoop, he encircled his hands around her waist and plopped her on top of his horse. She closed her mouth to prevent her heart from leaping out of it, and scrambled to entwine her fingers in the stallion’s mane before she toppled off. If she had bumped her ankle in the process, she did not know it. Her nerves were on fire.

Embarrassingly aware of how her skin burned at the forced intimacy Mr. Darcy had been obliged to take, she tried to remember what he had said before her thoughts evaporated into thin air. Ponies… It was something about a pony. Ah!

“If your intention in making such a comment was to distract me from the horse, it did not work, sir. If it was to pique my curiosity, then you have succeeded immensely.”

Silently, he grabbed the reins and turned in the direction of Longbourn. The jolt as the horse took its first steps made Elizabeth yelp in fright before she could stop herself.

Mr. Darcy slowed his pace. “I will lead him slowly and steadily. I will not allow any more harm to come to you.” His voice, lowered into a calm monotonous tone to calm both her and the horse, was reassuring. As was the intensity and confidence in his eyes as he spoke.

Loosening her hold on the mane, she sat up in her seat and nodded for Mr. Darcy to lead on. She trusted him.

They moved in silence for a short time, during which Elizabeth observed the gentleman in front of her. His dark hair curled up over his collar, reaching up as if it would push off his hat. He was taller than most men. He would never have difficulty reaching a book on the top shelf.

The giveaway is international and to participate all you have to do is  share your kind words and love with Jennifer Joy. Leave a question or comment on this post, and if you want to double your chances of winning, you can also comment on the review of Love Never Fails that will be posted on the 11th.

The giveaway is international and is open until the 17th of April. The lucky winners will be randomly picked and announced on the 18th of April.

Filed under giveaway, Pride and Prejudice