I first heard about Letter From Ramsgate in Suzan Lauder’s blog almost a year ago. I was immediately hooked on the premise and could not wait for the book to come out to read the entire story. When a blog tour was organised and I realised I would be the first one to review the book I got really anxious, but if you’ve read my review, you’ve probably noticed that this is just the angsty type of book I love 🙂 Also, you must have noticed that one of the aspects I enjoyed the most in the book was Mrs. Younge’s character. I won’t repeat why I was so fascinated about this character (you can read that in the review), but the impression it caused me was so considerable, I felt the need to share a little info on her with you through the below interview with Suzan Lauder, and vignette with Mrs. Younge.

From Pemberley To Milton: Hello Suzan, first of all welcome to From Pemberley to Milton! It is a great joy to have you with us today.

As I’ve mentioned before, Mrs. Younge was the character I’ve enjoyed the most in this book, and I would like to know why you decided to bring forth a character only mentioned briefly in Pride and Prejudice and give her a leading role.

Suzan Lauder: I’m really excited to be here, Rita, and especially to talk about Isabel Younge!

Because the first part of the story was set in Ramsgate, I knew a main part of the story development would be showing how Wickham arranged to convince Georgiana to elope with him. Canon says Mrs. Younge was known to him and collaborated with him, so I had to build his relationship with Georgiana’s companion. Since she was going to come out a little bit as a character, I decided to make her a key character so she could tell her back-story as well as her point of view regarding Wickham. It was hard not giving Wickham a voice in my story, but the style I chose let her speak for the two of them.

FPTM: Can you give us a little background on this character?

SL: Mrs. Younge is a pretty young widow of higher upbringing in my novel, and had a good education and reasonable connections prior to her widowhood. Mr. Younge was a wealthy younger son of a viscount. His gambling and poor investments left her almost destitute, so Isabel had no choice but to take on respectable work. She is keen to mould her charge (Georgiana Darcy) in her own image, as a gregarious darling of the ton.

FPTM: Mrs. Younge was very human and very real in this book. Is her character based on someone in particular?

SL: I suppose she’s a most like Mary Crawford, Maria Bertram, or Isabella Thorpe. Her main personality characteristics mimic vain, overly ambitious women. In her vanity, she wants Georgiana to be just like her, but her good intentions get set aside when greed takes over. Though not evil, she’s not as highly principled as the next person, and uses charm, good looks, and physical enticement to obtain momentary pleasure or long-term gain. Her opportunistic side can win over her ethics, yet she regrets those she’s hurt in the process—but not too much or for too long!

FPTM: Why is she named Isabel?

SL: I named her Isabel as a sort of homage to Isabella Thorpe in Northanger Abbey, the first Austen novel I ever read.

FPTM: In my opinion her character is neither good, nor bad. She is just human. Did you try to convey any message through the characterization of Mrs. Younge?

SL: Not intentionally, but the message that you can make up for foolish, hurtful acts is pretty clear. Vain people don’t believe they’ve done anything so terrible and a narcissist doesn’t realize what Isabel does: it’s never too late to make amends, even if the situation you messed up is unrecoverable. At least Isabel has a good heart and admits her faults.

FPTM: Mrs. Younge will always be associated with Wickham, how did she meet him?

SL: I like to assume she met Mr. Wickham at a social function in London: perhaps a ball or a rout. Wickham’s education at Cambridge will have gained him allies who would have travelled in the same circles as the Younges, who were probably on the fringes of the level of society that would willingly accept the Darcys and the Matlocks. It’s possible a former lover introduced Isabel and Wickham, or even Mr. Younge.

Mr. Wickham in his regimentals, later in Letter from Ramsgate – portrait of Andrew Copland by George Watson, 1807.

FPTM: What was it about him that captivated her?

SL: Jane Austen says Wickham has “all the best part of beauty, a fine countenance, a good figure, and very pleasing address.” In other words, he’s hot! And charming, too, based on all the people he had twisted around his little finger in canon. That’s what led her to a relationship with him.

FPTM: At which point did she discover Wickham’s true character? Or did she know all along, but preferred to ignore it?

SL: I think she had to suspect all along, particular, but ignored any problems that came with him. She was having a good time and, as long as his vices didn’t affect her, she was okay with it.

FPTM: Would she do things differently if she could go back in time?

SL: I doubt it. I think she wishes Georgiana hadn’t been hurt in the scheme, but I don’t think she would have changed any of her own actions.

FPTM: What is her biggest regret?

SL: That she got caught. The money would have changed her life. Also that she hadn’t seduced Mr. Darcy. She was quite taken by his good looks.

FPTM: Today, you’re sharing a scene from Letter from Ramsgate featuring Mrs. Younge with the readers of From Pemberley to Milton. Please describe what is happening as the scene commences.

SL: In this vignette, Mrs. Younge has been Georgiana’s companion for about a month now. They are walking along the Sands at Ramsgate when they encounter a certain gentleman.

Rita is a favourite of mine because she showed such enthusiasm towards Letter from Ramsgate from the first excerpt that I put up on my blog, road trips with the redhead. Each time the story was mentioned anywhere on social media after that, she piped in to say, “I’m looking forward to it!” That she was the first on the blog tour to review the novel was important to me, and I’m excited to share the original version of this scene from Isabel Younge’s point of view—the scene was re-written for the final novel.

All of a sudden, Miss Darcy spoke with an enthusiasm and lack of reserve that made Isabel momentarily glow with the satisfaction that her encouragement of Georgiana’s self-assurance was successful; Georgiana was certainly unrestrained in this moment.

“Isabel, look! An old friend of mine approaches! Oh, what fun!” Georgiana cried with a thrill in her voice. She moved towards the gentleman with unashamed familiarity.

Isabel turned in the direction Georgiana was going, and tried to make out the features of the tall man who approached with a confident gait. All of a sudden her eyes widened with surprise.

George Wickham! What is he doing in Ramsgate?

Isabel’s heart stopped. It could not be him.

But it was. With a genuine-looking smile, George Wickham approached her and Miss Darcy and tipped his hat. She was frozen to the spot, in a daze. What the devil could he mean by this? Will I be able to keep her countenance around him? Has he sought me out?

Holding her breath and trembling, she attempted a brittle smile as she waited for him to greet her. He moved closer and closer, but as his face came into clear view, his gaze was fixed on Miss Darcy, and he ignored Isabel altogether.

Without reserve, Wickham held out his hand to take Miss Darcy’s and bowed over it. “Miss Darcy! How do you do? How very fortunate for me to meet you here! What brings you to Ramsgate?”

Georgiana glowed pink under Wickham’s grin; the girl’s blush and shy smile spoke to her youth.

When it appeared he had not even noticed her, Isabel released her breath, but became indignant over the snub and jealous of the attention he paid to her charge. She was a vain woman, accustomed to the role of the object of his flattery.

“I am here for the summer. My brother arranged it for me.”

If Isabel had not known Wickham as well she did, she would not have recognized the twitch in his smile or the deep swallow of discomfort for what they were. George Wickham was afraid. What had unsettled him?

“And is your brother with you?” His voice wavered, which confirmed his anxiety. “No, Fitzwilliam is travelling on business related to the estate. He will be in the country most of the summer. ‘Tis a pity he is not here. He would have liked to see you.” Georgiana was sincere. 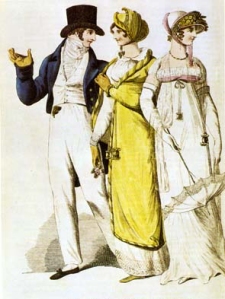 “A pity indeed. I should have enjoyed renewing the acquaintance.” His body relaxed.

Wickham then turned towards Isabel. She checked herself to hide her bewilderment,—all she could manage under the circumstances—stood tall and proud, and put on her most inscrutable, but ladylike, expression.

“Would you do me the honour and introduce your friend?” he said to Georgiana.

“This is my companion, Mrs. Younge. Mrs. Younge, this is Mr. Wickham.”

For an instant, she expected him to reach out to take her hand, but instead, he offered a polite smile and performed a perfunctory bow as if this were their first introduction. She forced a smile in response, as she made her curtsey in the most economical way.

She was affected by him, even though their greeting had not been physical. The smoothness of his voice and the strength of his body in his fitted clothes reminded her of what they once shared—all of which ended when he discovered she was penniless.

Meryton press would like to offer 8 copies of Letter From Ramsgate to readers following this blog tour.

To enter the giveaway, please click on the below link:

Conditions of the giveaway are explained below:

Readers may enter the drawing by tweeting once a day and daily commenting on a blog post that has a giveaway attached for the tour. (Review posts are not part of the giveaways). Entrants must provide the name of the blog where they commented (which will be verified). If an entrant does not do so, that entry will be disqualified.

A winner may win ONLY 1 (ONE) copy of Letter from Ramsgate by Suzan Lauder. Each winner will be randomly selected by Rafflecopter and paperback or ebook format will randomly be selected for each winner as well.

Follow the blog tour for more chances to win the giveaway 🙂 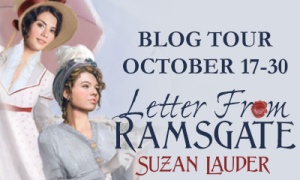 10/23   Guest Post or Vignette, GA; From Pemberley to Milton