This month’s agenda is filled with Christmas posts 🙂 For me Christmas has always been a family season, and even if I haven’t enjoyed it in the last years as I used to, I’m having a blast organizing all these seasonal posts. After Nicole Clarkston’s christmas vignette to end the Blog Tour of The Courtship of Edward Gardiner, I am happy to bring to you today a guest post by Victoria Kincaid where she shares what she learned of her investigations regarding regency Christmas traditions.

I found out about Victoria Kincaid’s book at Just Jane 1813, and I immediately knew I had to read it. In fact, I had been wanting to read a Victoria Kincaid book for a while, so A Very Darcy Christmas came at the right time.

So far I’m loving it, but my review will only come next week, for now, I’ll leave you with Mrs. Kincaid guest post.

When I decided to write a Pride and Prejudice variation set at Christmas-time I realized it would be necessary to learn more about Regency Christmas customs so I could make them part of the story.   What I found was enlightening. While some traditions were similar to ours today, many were different. They did not send Christmas cards or set up Christmas trees. They did not give presents except to children. There is some dispute about how much Christmas carols were sung, but it may have been confined to the lower classes. I didn’t read this in my research, but I’m pretty sure they didn’t have Elf on the Shelf.

They did have decorating for Christmas, parties, and feasting—although they all took different forms during the Regency. They decorated with holly, evergreens and other greenery, but not before Christmas Eve (it was considered bad luck). They also had kissing under the mistletoe (or a kissing bough), which seems like an odd custom for a time period that was so rigid about contact between the sexes. The Christmas season began in early December and ended on Twelfth Night; during that time the upper classes did a lot of visiting, partying, and other kinds of socializing. They played parlor games and ate a lot of good food, including some things we still eat today: gingerbread, march pane (marzipan), and turkey.

It was a time for gift giving to the lower classes. On Boxing Day (the day after Christmas) the well-to-do would give their servants boxes of gifts as well as presents to the less fortunate in the neighborhood. The lord of the manor would sometimes host a Christmas day open house of sorts that would be the only celebration some of the poorer neighbors would experience.

I found these differences and similarities very interesting and it was great fun incorporating them into the A Very Darcy Christmas. I hope you enjoy them as well!

“I apologize, Lizzy,” her father said. “Trying to stop her was like trying to halt a runaway carriage. When she declared her intention to visit Pemberley with or without me, I thought my presence might mitigate the damage.”

Elizabeth took her father’s arm. “I am very pleased to see you both, Papa. And it will provide an opportunity to show you Pemberley.”

He smiled gently. “I must confess, that is something I am anticipating with pleasure. What I have seen so far is quite grand.”

Elizabeth gave her father’s arm another reassuring squeeze, but her spirits sank. With Georgiana visiting Rosings Park for the yuletide season, Elizabeth and William had been anticipating a quiet Christmas celebration by themselves. Since they had arrived at Pemberley after their wedding voyage, Elizabeth’s life had been a whirlwind. She had spent much of her time familiarizing herself with the household and the servants, caring for tenants, entertaining neighbors, and performing the many other tasks required of Mrs. Darcy. William had been looking forward to having her to himself over Christmas, and the feeling was very much reciprocated.

Well, Mama and Papa are only two people, Elizabeth reminded herself. And Papa will happily spend much of his time in the library. Certainly I can find a way to occupy Mama.

Elizabeth and her father had just reached the top of the stairs when she heard quick footsteps behind them. Glancing over her shoulder, she found one of the footmen rushing toward her, his brow creased with worry. “Madam, Mr. Giles sent me to inform you. Miss Darcy’s coach is on the drive!”

Elizabeth blinked. Georgiana? What was the matter? Her sister-in-law had planned to visit Rosings Park for at least three more weeks, until Twelfth Night. Although Lady Catherine had initially severed all contact with Pemberley, she had recently insisted on Georgiana’s company—no doubt hoping to counteract Elizabeth’s pernicious influence. Georgiana had assented in part because she hoped to mend the breach between her brother and her aunt, although William had told her not to bother.

Elizabeth turned to her father. “Papa, I must meet Georgiana’s coach. Sally will help with anything you might need, and I shall see you at supper.”

Her father patted her hand reassuringly. Elizabeth quickly retreated down the great marble staircase. Georgiana was just entering the house. The slight woman was rumpled from travel, and some of her blonde curls tumbled into her eyes. But Elizabeth was most concerned about the signs of strain around the younger woman’s mouth and the tension in her shoulders.

Giles took Georgiana’s pelisse and bonnet, and then Elizabeth hurried to embrace her. “Is there trouble, my dear?” Elizabeth asked. “Are you feeling quite well?”

“Yes, my health is good.” Georgiana grimaced. “But William was correct. Visiting Rosings was most unpleasant. Aunt Catherine took every opportunity to disparage you and William. In addition, she invited two young men—both distant relatives of hers—to Rosings. It is clear they think they can be my suitors.” Elizabeth bit her tongue against a quick retort. How dare her ladyship ambush Georgiana in such a way? “It was so uncomfortable.”

This was one of the longest speeches Elizabeth had ever heard from Darcy’s sister; clearly she was quite disturbed. Elizabeth squeezed Georgiana’s hand sympathetically. “I can understand. Were they both so terrible?”

Georgiana sighed, pushing curls from her eyes. “Perhaps not, but I am not prepared to meet suitors, particularly without you and William to give me advice.”

Of course. After the Wickham debacle, Georgiana would be reluctant to trust her own judgment about men. Lady Catherine should not have attempted to influence her niece’s matrimonial prospects, but obviously she hoped to circumvent William’s authority. Elizabeth could think of several things to say about the woman, but she held her tongue.

“I decided to come home. I hope you are not too disappointed with me.”

Elizabeth gave her another hug. “Of course not, darling. I am very happy to see you, and William will be as well. He is out visiting tenants but will be home for supper. We would have missed you at Christmas! Oh, and my parents have come to visit from Longbourn as well.”

Georgiana gave a gentle smile. “How lovely. We shall be a merry party!”

Yes, thought Elizabeth. Hopefully my mother will not celebrate Christmas by discussing how we will be murdered in our beds.

Georgiana gave her sister-in-law another hug. “And you have decorated so nicely for the yule season. Mama never hung greens before Christmas Eve.”

Elizabeth smiled despite another reminder of her decorating deficiencies.

Georgiana took her leave and climbed wearily up the stairs toward her bedchamber. Although Elizabeth was pleased to have her sister-in-law home for the yule season, she could not prevent a pang of regret over more loss of privacy. But it is a big house, Elizabeth thought as she watched Georgiana disappear up the stairs. She is merely one more person. We shall hardly notice her.

Elizabeth had only taken one step toward the stairs when a brisk knock sounded on the door. Oh no, what now? Elizabeth fervently prayed for a wayward deliveryman. 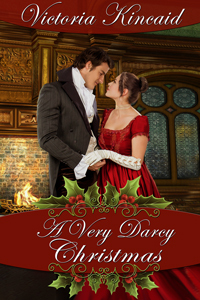 Victoria Kincaid brings her own Christmas gift to the readers at From Pemberley to Milton. She would like to offer one ebook copy of A Very Darcy Christmas to a randomly chosen reader who comments on this post. To increase the chances of winning, comment on the review that will be published on the 10th of December, comments on both posts will be considered for the giveaway.

The giveaway is international and ill end on the 15th of December, with the winner being announced shortly after.