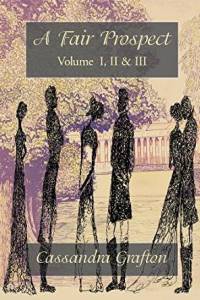 I read A Fair Prospect trilogy in 2013 and it immediately became one of my favourite books. But the story is told throughout 3 volumes and I had to wait some months before the release of the next volumes to finish reading it. So in 2014 before my first trip to Bath I decided to re-read all volumes to have the pleasure of reading the entire story without any interruption. But once again I failed to write a review, so this year I decided to re-read this story for the third time and actually write my opinion about it.

When I finished reading it this time I came to two conclusions: I will re-read it again and it continues to be one of my favourite books!

But why do I love it so much? Because Cassandra Grafton created one of the most passionate, well written and developed stories I have ever read! Many of the scenes she created are still very present in my memory and I cannot think of many of them without getting goosebumps.

A Fair Prospect begins at my favourite starting point for a JAFF variation: at the Hunsford proposal. This time the proposal occurs in the outdoors and just before a huge storm descends in Kent. Mr Darcy is the perfect gentleman and even if he is mortified and angry with Elizabeth’s refusal, he offers to take her home in his carriage, but when she is descending the carriage, something happens that will forever haunt her.

From this moment on, they will be forced to see each other more times than they would prefer, but I’m sure that janeites will never complain about too many Darcy/Elizabeth scenes 🙂

After Mr. Darcy delivers his letter to Elizabeth, they are forced to dine together at Rosings, and during that night we see Mr. Darcy and Elizabeth having some of the most intense scenes I’ve ever seen. Their dialogue in Lady Catherine’s room is something I’ll never forget. The eagerness Elizabeth has to tell him how wrong she was, and the pain he feels for her rejection are impressive. I was pulled into the story with this scene and I could not leave it ever since. I love books that make me feel something and this one certainly achieved that goal.

All the dialogues during that night are perfectly crafted, saying exactly what needs to be said, leaving what needs to be unsaid in the underlines, and having the beautiful power of being misconstrued by those hearing it.

It takes a true talent and mastery of the english language to be able to do what Cassandra Grafton did in this scene. It is even hard to express how perfectly the dialogues were created.

But what amazed me the most, was that this was not a one time occurrence, the entire book is perfectly crafted with little details coming into the story in the perfect time. Small incidents or words have major impacts in the story, and kept me turning page after page with a hunger for more that I don’t usually feel.

While the action on the first book occurs in Kent, the second volume will take us to London where the story progresses with Elizabeth starting to realise what is truly in her heart.

In this volume a new character appears and Darcy starts to believe he has some competition. I loved this part of the story as there is nothing better for me than a little jealousy in Darcy’s heart.

As the story progresses Darcy tries to give Elizabeth the space he believes she needs, but again fate will not help, and they will spend much time together. Their encounters, even when filled with misunderstandings, start to give Darcy some hope, but that hope will be ripped from him with a force of a tornado. I could hear the little pieces of Darcy’s shattered heart at the end of volume two and I could only hope that volume three would bring him a worthy reward.

With a broken heart Darcy removes himself to Bath, and it is in this romantic town the narrative in volume three will be developed.

Once again we will see plenty of Darcy and Elizabeth but in this volume we will see both of them pining for the other. They are both in love with each other, and they both believe their love to be unrequited. I love this scenario and the angst, but when Darcy believes Elizabeth is telling him she loves someone else, my heart broke into a million pieces. How devastated he must have been?

But fear not dear readers, the moment they come to understand each other’s feelings is equally intense, and so, so romantic!!! I think I held my breath and could only release it at the end of the scene! It was one of the best get together scenes I have ever read, and luckily for me it was extended through many, many pages  🙂 There are no words to express how beautiful and intense their love was in this story and the streets of Bath will always remind me of the desperate measures taken in this book.

A Fair Prospect is an introspective book with a slow paced story but with an intensity that will keep readers glued to it. It is overly romantic, all scenes between Darcy and Elizabeth are electrifying, their dialogues are breathtaking and the sequence of events beautifully formulated.

It remains one of my favourite books of all times and I highly recommend it to anyone who loves Darcy and Elizabeth!

You can find this book at Amazon. com