Today is a very special day for me because it marks the second anniversary of From Pemberley to Milton!

People usually say that time flies by when we are doing something we love, but honestly, I do not feel that way. I feel that I’ve been blogging for much much longer than 2 years, and it’s even hard to remember what I used to do with my free time…

It all started as a way to organise myself, to list the books I had read and to have an idea of which authors I would want to read next, but soon this blog became much more than that!

From Pemberley to Milton opened the doors to many experiences, but above all, to conversations with kindred spirits. Because of it, I got to know people with whom I feel really connected with and whom I consider true friends.

It all started in 2015 with me posting the review of Mr. Darcy’s Noble Connections, after this first step, comments started to appear and I started talking to many of the people with whom I’m still in contact today.

Getting to know all of you was a plus, and one I was not expecting, I never imagined a JAFF community existed and that everyone was so welcoming and nice 🙂 Thank you so much for all your kind words in the past 2 years, and for being such na important part of my live!!!

But the conversations I established with you were all online until the beginning of 2016. That’s when I got to meet Elizabeth Adams, Joana Starnes, Sophie Andrews and Ana from My Vices and Weaknesses. 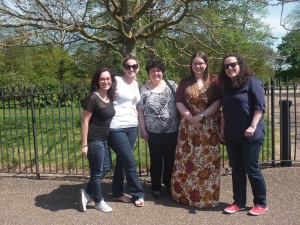 This first meeting was absolutely wonderful, but it was only the beginning. Since then I’ve been with these ladies many more times, and I believe we are now establishing a tradition of meeting in London once a year 🙂 Who wants to join us next year?

That first meeting opened the door to other encounters, and the next time we all met, we even added another Janeite to the party, author Caitlin Williams, whom I was lucky to meet a second time just last month, along with another group of amazing ladies. 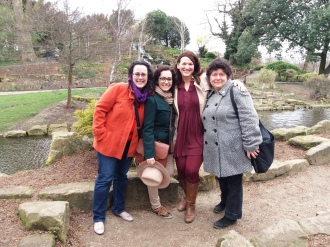 But my Janeite meetings were not restricted to the UK, I crossed the ocean and met fellow blogger Claudine Pepe in New York City that same year. 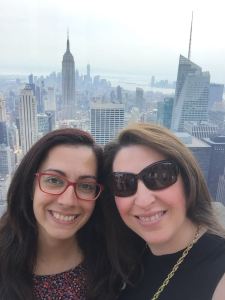 And then, back in Europe, I had an opportunity to chat with some readers of my blog like Glynis and Sonia. I confess this was particularly touching for me because I might have met other authors and bloggers if I didn’t have my own blog, but I don’t think I would ever have met other readers, and I absolutely loved being with these ladies 🙂 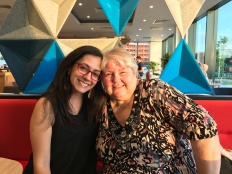 This year, my janeite encounters continued and I met several writers such as Cassandra Grafton and Amanda Grange . 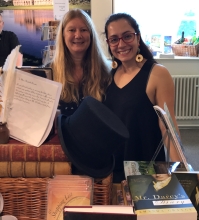 And of course, through all this time, Ana and Joana were a constant in all Jane Austen related places 🙂

In fact, Joana was the one who introduced me to Mira Magdo, and later on I got to introduce Mira to Ana 🙂

The last day I was with Mira, I was telling her I had to prepare this post, because my blog anniversary was coming, and you’ll never guess what happened! We were on a train on our way to London, when we discovered that, in fact, we started our blogs exactly in the same day!!!

The 3rd of August 2015 saw 2 JAFF blogs come to life, From Pemberley to Milton and Obsessed With Mr. Darcy! And not only did we start our blogs on the same day, but we also published reviews of books from the same author, Abigail Reynolds. We could not believe the coincidence! So I would like to ask you to wish, along with me, a happy anniversary to Obsessed With Mr. Darcy! Congrats for such a fun and original blog Mira, I still love the tissues, chocolate and icecream things…

And of course, to celebrate our blog anniversary, we are doing a giveaway for our readers 🙂

As you, wonderful people, have been with me and Mira on this journey, you shared, liked, commented, entered giveaways, wrote us messages, etc,. We would like to offer one lucky winner a copy of The Darcy Monologues, signed by the editor Christina Boyd, and 3 authors: Lory Lilian, Joana Starnes and Caitlin Williams along with a Mr. Darcy Magnet. The giveaway is international and open until the 22nd of August.

You can enter by commenting on BOTH From Pemberley to Milton and Obsessed with Mr. Darcy‘s original wordpress posts. Good Luck! 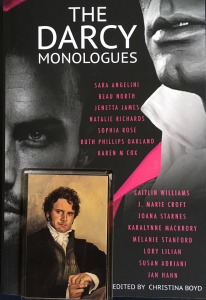