A Most Handsome Gentleman Review & Giveaway

After the angsty variation Letter From Ramsgate, Suzan Lauder decided to venture into comedy and developed an unthinkable premise based on Mr. Collins character. She didn’t go so far as to make him witty and interesting, but she made him A Most Handsome Gentleman, or as everyone keeps saying in the social media #HOT Collins.

The changes in his appearance, along with his own foolish character, were sufficient to change the behaviour of many P&P characters towards him, which created the funniest dialogues and situations you can think of. Can you imagine the impact of a good-looking man coming to Longbourn in search of a wife?

I confess I was impressed with Mr. Collins because I can imagine some situations that would render Mrs. Bennet speechless but none that would have the same effect on Lydia, and that my friends, was Mr. Collins greatest achievement in this book! Well…maybe not the greatest. His impact on Lady Catherine’s behaviour was both unexpected and hilarious, so the first place in the podium may go to that feat.

Both scenes made me laugh really hard, but they were not the only ones. The verbal discussions between Mr. Collins and Mr. Bingley, Mr. Collins comments on Elizabeth’s skinny appearance, his attraction to Charlotte and the scenes Mr. Darcy and Elizabeth see on the fields behind Longbourn are amongst my favourite moments in this book, but it’s hard to highlight only some scenes because the entire book is incredibly funny. I could not put it down!

I also enjoyed the fact that despite all the craziness that involved Mr. Collins’ presence in Meryton, Elizabeth remained true to herself and was not easily taken by her cousin’s good looks. He may be good-looking, but he’s still a fool, and if I may say, an even more annoying one, so I was really glad that to see that Suzan Lauder didn’t include Elizabeth in the group of ladies who would faint at the sight of Mr. Collins.

I had a great time reading A Most Handsome Gentleman and could not recommend it enough for those who want to relax and enjoy a good comedy. It is a highly entertaining book that will make readers laugh out loud from the first page until the last.

Suzan Lauder took a risk by venturing into this new subgenre but she nailed it! Congratulations!

You can find A Most Handsome Gentleman at:

Her first effort at a comedy, A Most Handsome Gentleman is the fourth time Lauder has been published by Meryton Press. Her earlier works include a mature Regency romance with a mystery twist, Alias Thomas Bennet, a modern short romance Delivery Boy in the holiday anthology Then Comes Winter, and the dramatic tension filled Regency romance Letter from Ramsgate.

She and Mr. Suze split their time between a loft condo overlooking the Salish Sea and a 150-year-old Spanish colonial home near the sea in Mexico.

Suzan’s lively prose is also available to her readers on her blog, road trips with the redhead www.suzan.lauder.merytonpress.com, on her Facebook author page https://www.facebook.com/SuzanLauder, and on Twitter @suzanlauder.

10/26   From Pemberley to Milton; Review, Giveaway 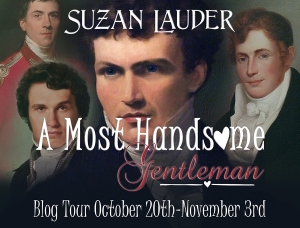 Suzan is offering 8 ebook copies of A Most Handsome Gentleman on this blog tour.

Readers may enter the drawing by tweeting once a day and daily commenting on a blog post or review that has a giveaway attached for the tour. Entrants must provide the name of the blog where they commented. Remember: Tweet and comment once daily to earn extra entries.

A winner may win ONLY 1 (ONE) eBook of A Most Handsome Gentleman by Suzan Lauder.

Each winner will be randomly selected by Rafflecopter and the giveaway is international.

45 responses to “A Most Handsome Gentleman Review & Giveaway”