I hope you’ve enjoyed this beautiful week and that you are as ready as I am for the weekend! I had to travel to Germany on business this week so I decided to stay a little longer and do some sightseeing in Berlin which I hadn’t visited in over a decade. This time I’m visiting the city alone and even if it is strange for me to be all by myself for a couple of days, I’m finding it quite nice because not only I get to go exactly where I want to when I want to, but also because it gives me plenty of me time which I’m using to catch up with my TBR pile 🙂 The problem is that new books keep coming out and I am often taken off track. The latest book that took me away from my TBR pile was Obstacles by Belén Paccagnella. She is a new Meryton Press author who decided to take our dear characters into a completely different environment, and I have been feeling the need for something different lately, so this caught my attention.

But let me share the book blurb with you so you may know of what I’m talking about.

Not all obstacles are restricted to the show-jumping arena…

Though Elizabeth Bennet lives an uneventful life instructing young equestrians at Longbourn, the family farm, she dreams of winning a show-jumping competition on Liddy, her spirited mare. But her life is upended when a team of world-renowned riders arrives at Netherfield, the neighbouring estate, and uses it as their training headquarters. As she assists the newcomers and their prize-winning mounts, she meets William Darcy, a wealthy and arrogant—albeit talented—rider with Olympic aspirations. He first insults and then ignores Elizabeth, and her feelings teeter between disgust at his hauteur and admiration for his equestrian prowess. As she discovers first-hand the rigors of a world for the elite, will Elizabeth change her perspective about love, trust, and the foibles of her own family?

Originally known as “Obstacles to Overcome,” Obstacles pays homage to Pride and Prejudice in the highly competitive world of equestrian show jumping.

Different right? I had never heard of a premise like this and I can easily see it becoming a movie, but do you know what else caught my attention? The cover! You know how I love covers, and I really liked some details on the cover of Obstacles like the scrapbook and the scissor. These small details can make a huge difference:) Also the back cover is equally appealing, I can clearly picture Elizabeth Bennet in that environment, I know that in regency she is not that fond of horses, but if you think of a modern Elizabeth, this is just how I imagine her 🙂

Fun fact: the horses on the back cover where running in the fields surrounding Netherfield from the 1995 adaption when Janet visited the place in 2012. She took the picture herself and decided to use it here because it was fitting to the story 😉 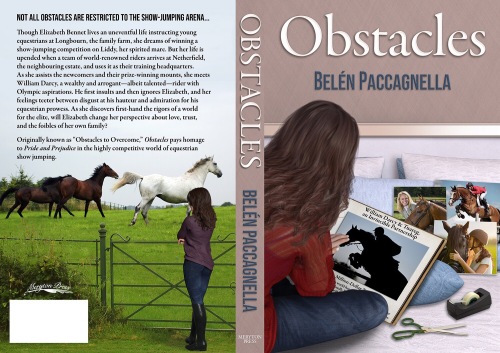 So what do you think of it? Have you heard from this book before? What about the author? Do you want to find out more about her? You can read all about Belén I’m the author bio below 🙂

Born in Buenos Aires, Argentina, Belén Paccagnella discovered the world of Jane Austen fan fiction after watching the 1995 BBC miniseries of Pride and Prejudice. In her teens, she lived in Brazil when her family moved to the city of Curitiba due to her father’s work. She moved back to Buenos Aires a few years later, where she studied agronomy but finally pursued a different career and started working in the development administration of shopping centres.

In 2001, she started writing both Regency and modern stories adapted from the Pride and Prejudice storyline, merging drama, humour, and adventure while creating characters with unique traits.

Belén still lives in the suburbs of Buenos Aires, where she shares her home with her daughter and her pets while spending her time working, reading, and writing.

If the blurb and cover got you curious, please don’t forget to follow the blog tour in the usual blogs starting on September 17th!

Also, if you want this book to be uploaded to your kindle as soon as it is out, you’ll be happy to know that the book is available for pre-order from today until the 3rd of September!

If you look for it at amazon it is already there! You can follow this link to go straight to it 🙂

The book will be released on September 4th, and I’m looking forward to read your reviews of it 🙂

As I mentioned earlier I am currently traveling in Germany on business and yesterday when I was about to pay for a postcard I was buying, I saw this amazing tote bag!!!

Of course I couldn’t resist and bought every single one the store had, unfortunately they only had 3, so I’m keeping one to myself, I’m offering another one to a dear friend and I thought that one of my readers may like this bag too, so I’ll be offering it to a randomly chosen reader.

You know the drill, just comment on this post and let me know you’d like the tote bag. The giveaway is international and is open until the 8th of September.