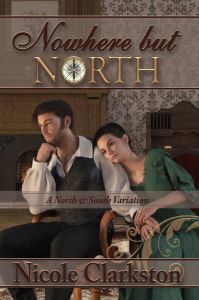 Nowhere But North is a character driven book that uses flashbacks to enlighten the reader about the life events that shaped the characters personalities. It starts with what appears to be a forced marriage scenario, which is not only shocking but also innovative in the north and south variations genre, and it develops into a heart whelming love story of two newlyweds who are still learning about what married life is all about. The main story will alternate with chronological flashbacks that will transport the reader into the past to witness several marking events that contributed to the characters development, and allow him to better understand each character.

It is not easy to go back in time and remain truthful to characters who were created by another author, let alone show us how their personalities developed, and the fact that every single flashback was pure perfection in the North and South realm shows a deep character knowledge, and a writing skill that very few have. In fact, I believe only a couple of authors would be able to write such a perfect North and South Variation, which is in my opinion as good as Elizabeth Gaskell’s North and South in terms of character development. Had I not known these flashbacks were written by Nicole Clarkston, I could have easily believed that Gaskell had written them herself considering they are perfectly in line with the characters she created.

I have always been fascinated by John Thornton’s life and this book was the first to give me the pleasure of reading about it. I had always been curious about his father and his childhood, about his journey from a teenager into adulthood, I always wanted to know how he made it, how he became a Mill Master after everything that happened to him, and thanks to this book I was finally transported into the past and made the wonderful journey of his life alongside with him. I witnessed him in his worst moments, I felt his struggles and insecurities and now I feel I understand this man even better and respect him all the more because of it. His life story is so interesting that it deserves a place in a North and South variation book and Nicole Clarkston did a wonderful job at making that happen.

Apart from the profound character knowledge Nicole Clarkston demonstrated with this book, venturing into flashbacks alternated with real time events showed a tremendous writing talent. Nicole Clarkston certainly knows how to write a beautiful story with interesting and complex characters while maintaining it clean, and captivating the reader at the same time. The transitions into and from the flashbacks are absolutely perfect, with the scene of a chapter being somehow connected to the scene in the next chapter, even it that scene is happening several years later. It takes true talent and courage to craft such a complex story the way Nicole Clarkston did and she deserves to be praised for such a magnificent work.

I loved the initial scenes between Margaret and John, when they were still afraid to let their emotions be known, but also decide to be honest with one another. I am clearly an angsty type of person and books with angst are usually my favourite, but it was nice to see that in this book no unnecessary angst was present. The characters already had too much to overcome in their life so it was nice to see that, at least amongst them, there were no unnecessary misunderstandings. Nicole Clarkston knew how to perfectly balance the emotions in this book, making sure they were realistic, but taking care not to make the story too dark, the result was an incredible book that made my heart ache at times and tears come to my eyes, but which also made me smile with the tenderness that was emanating from the pages. Margaret and John’s love was pure and stout and it was a joy to see how their companionship grew with each page that I turned and how passionate they both were about one another.

It is hard to say what I enjoyed the most about this book because I loved it all, the character insight and development, the writing style, the flashbacks, John Thornton, their relationship, the romance, the secondary characters and how it all came into place, John Thornton (I know I already mentioned him, but the character is so swoon worthing that I have to mention him twice), the balance, etc.

I am completely rendered to this story and I honestly consider this is the best North and South variation book I’ve ever read. I loved both No Such Thing as Luck and Northern Rain from this author, but I believe that with Nowhere But North Nicole Clarkston took the stakes into a completely different level. This book is a masterpiece that should not be missed by anyone who enjoys good literature and I highly recommend it to all readers.

P.S – I have to talk about the cover!!! Isn’t it beautiful? To me it looks absolutely perfect! It reflects exactly the story and environment we will find in the book. We can feel the tenderness between the characters in it and the entire setting transported me to the books scenes. The detail of the compass inside the O, and which we will see separating the chapters inside the book, is the cherry on top of the cake! It is my favourite cover from Janet Taylor so far, and I’ve loved them all 🙂

You can find Nowhere But North at:

16 responses to “Nowhere But North”