His Choice of a Wife – Excerpt & Giveaway 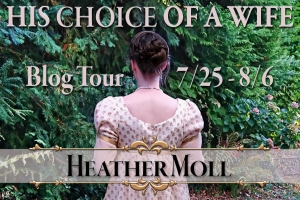 I’m very happy to be welcoming author Heather Moll for a wonderful guest post about her recently released book, His Choice of a Wife. Ms. Moll choose to bring to From Pemberley to Milton an excerpt where Mr. Darcy allows Georgiana to waltz in a ball and because this was still a new type of dancing in 1812, she also developed a guest post where you can learn more about this dance.  Also, there is more to this scene then the excerpt you see here today. There is another wonderful scene at Meredith’s blog Austenesque Reviews, so if you want to know more about waltzing, please stop by her blog and check it out 🙂

Thank you for hosting me at Pemberley to Milton today, Rita! I’m very excited to share a short excerpt from His Choice of a Wife and talk a little bit about waltzing in England. In the scene below, Elizabeth is returning Georgiana Darcy’s call—at her brother’s house—where the two talk about learning a new dance.

“I spend Thursday mornings in dance lessons with other ladies. There is but one in the group for whom I felt anything akin to friendship. My brother may loathe dancing”—Miss Darcy offered a small smile—“but even he would agree to the importance of learning what is fashionable.”

“To execute perfectly the steps of an English country dance and to make polite conversation while remaining attentive to the demands of the dance requires skill. What did you and your companions review today?”

“The turning waltz” was her reply, and they spoke animatedly about the intimate dance and its supposed affront to English morals. Miss Darcy declared she would be too mortified to be seen clasping a gentleman so closely but conceded the dance was graceful.

“It is fortunate that I am far too proper for such wickedness,” Elizabeth said playfully. “Otherwise, I might regret not having the opportunity to learn the steps so I might scandalize my country neighbors.”

“There is nothing shocking in the side-by-side position, only in the closed.” Miss Darcy inhaled deeply and nearly tripped over her words. “Would you care for me to show you the steps?”

Is Darcy doing something scandalous by allowing his little sister to learn to waltz in 1812? But no one even waltzed in Regency England, right?

While it’s true that a waltz on Dancing with the Stars was nothing like what the English danced in early 19th century, the waltz WAS danced then, and by the time Georgiana is learning it wasn’t as inappropriate as you might think. Early waltz music was sold by London’s music vendors in the 1780s. At first, waltz only referred to the music and the dancing figures were the same as English country dance steps.

By the 1790s, the couple-waltz appeared in England at society balls— twenty years before His Choice of a Wife is set. The Morning Post in 1801 describes how the Marchioness of Abercorn opened her ball with the “German waltz” and it was attended by much of the nobility and royalty. Other balls mentioning a waltz appear in the newspapers in the first decades of the 19th century, and dancing masters begin advertising their services in teaching the waltz.

So what was the controversy about this new dance?

Some hints appear in what was said in this 1811 article: “… no considerate father, mother, husband, or brother, can approve of this familiar clasping German Waltz, and that it can only find advocates among volatile young men who like to twist, twirl and spin the girls about, and turn them into whirligigs”.

The author of the etiquette guide The Mirror of the Graces also said in 1811: “There is something in the close approximation of persons, in the attitudes, and in the motion, which ill agrees with the delicacy of woman, should she be placed in such a situation with any other man than the most intimate connection she can have in life.”

All of that spinning and close holding and extended eye-contact was quite a change from country dances!

The debate waged through the first decade of the 19th century, but the nobility danced it… and the moralists were worn down. Change is hard, right? A turning point was in 1814 after the—temporary—defeat of Napoleon when European dignitaries had state visits to London and the waltz was widely danced. Even Jane Austen’s brother Henry attended one of the state balls that summer!

Different classes of London society had differing opinions of the waltz, but the truth was it was popular among higher circles and foreign dignitaries, and it gradually made its way down the social ladder and substituted country dancing.

So what exactly did Georgiana teach Elizabeth in 1812 in His Choice of a Wife?

About 50 seconds in to this short clip you’ll see the side-by-side promenade position, and then the more intimate closed position, with left arms arched over their heads and right arms wrapped around their partners. These are what the Elizabeth and Georgiana practice first, but it’s the faster-paced—and noisy— hopping and skipping that attracts the attention of anyone else who might be in the house…

If any of you are interested in reading a longer excerpt from that waltzing scene, visit yesterday’s blog stop at Austenesque Reviews.

When a man’s honor is at stake, what is he willing to risk for the woman he loves?

After a disastrous marriage proposal and the delivery of an illuminating letter, Fitzwilliam Darcy and Elizabeth Bennet hope never to lay eyes on one another again. When a chance meeting in Hunsford immediately throws them in each other’s way, Darcy realizes his behavior needs correcting, and Elizabeth starts to appreciate his redeeming qualities. But is it enough to forgive the past and overcome their prejudices?

Jane and Bingley’s possible reconciliation and Lydia’s ill-conceived trip to Brighton pose their own challenges for two people struggling to find their way to love. When scandalous news threatens their chance at happiness, will Darcy and Elizabeth’s new bond be shattered, or will their growing affection hold steadfast?

You can find His Choice of a Wife at:

Heather Moll is an avid reader with a B.A. in European history and a M.A. in library science, so it is astonishing that she did not discover Jane Austen until her late-twenties. Making up for lost time, she devoured all of Austen’s novels, her letters, and unpublished works, joined JASNA, and spent far too much time researching the Regency era. She is thrilled to have found fellow Janeites and the JAFF community, if only to prove that her interests aren’t so strange after all. Heather is a former librarian turned stay-at-home mother who struggles to find time for all of the important things, like reading and writing. 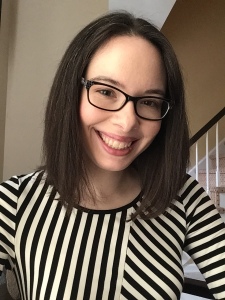 You can contact Heather thought the following social media:

We are right in the middle of the blog tour, so you still have plenty of excerpts, guest posts and reviews to read. You can see the next stops below:

July 26 Babblings of a Bookworm

July 27 My Love for Jane Austen

July 28 Half Agony, Half Hope

July 30 From Pemberley to Milton

Aug. 2 Diary of an Eccentric

Aug. 6 My Vices and Weaknesses

Meryton Press is giving away 8 eBooks of Heather Moll’s His Choice of a Wife. To apply to it all you have to do is comment on this post and click on this rafflecopter link.

46 responses to “His Choice of a Wife – Excerpt & Giveaway”