Today I am sharing an excerpt of A Chance Encounter in Pemberley Woods whose first pages I found gripping! This is a low angst novella that readers can devour in one afternoon and that introduces a very cute new character to the plot. Spoiler alert: You can actually see that new character on the books cover which is absolutely amazing!!!

Have you heard about this book yet? It is Brigit Huey’s first novel and if you take a closer look at the book’s details on Amazon’s page, you can see it was edited by the lovely Nicole Clarkston 🙂 Promising, right? If you haven’t heard about it yet, you can read the blurb and the excerpt to decide if this is your next weekend read 🙂

A baby alone in the woods

And a second chance at love

Fitzwilliam Darcy returns to his beloved Pemberley with one thing on his mind ̶ to forget Elizabeth Bennet. Riding ahead of his party and racing a storm, he happens upon the very woman he wants to avoid. To his astonishment, she is holding a baby whose name and parentage are unknown.

Elizabeth Bennet never dreamed she had wandered into Pemberley’s Woods on her afternoon walk. But when she finds an infant alone in the storm, she turns to the last man in the world she wants to see ̶ and the only one who can help them both.

As the mystery of the baby’s identity intensifies, Elizabeth finds Mr. Darcy to be quite the reverse of what she expected. But when the child’s family is discovered, will the truth bring them together, or tear them apart? 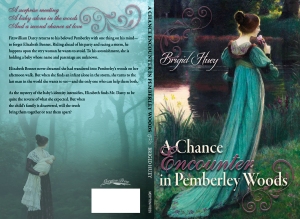 You can find A Chance Encounter in Pemberley Woods at:

To his surprise, Miss Bingley and Mrs. Hurst stood apart from the other ladies, their heads bent together—similar unhappy looks upon their faces. He felt a pang of remorse. Had they not been in constant pursuit of him, they might have been pleasant enough. However, their treatment of both Miss Elizabeth and Georgiana was inexcusable.

As soon as they saw him, they ceased their private conversation, rising to greet him instead. Sycophantic smiles pasted on their faces, they asked whether he wished for tea and cake. He accepted the tea then moved away from them to sit near Georgiana.

“Shall we not have some music?” Mrs. Hurst enquired. “I am sure Caroline would oblige us.”

Darcy answered in what he hoped was a polite and kind way. Caroline moved toward the pianoforte, and the rest of the company sat nearby, the better to hear her performance. It was masterfully done, of course. Caroline was an extremely accomplished woman. Darcy stole a glance at Elizabeth. She was sitting beside her aunt, attending to the music with polite interest.

When Caroline had played two pieces, she stood and invited Georgiana to play. Darcy looked at his sister, trying to determine how best to make her excuses. He knew she disliked playing for company. To his surprise, however, Georgiana rose and made her way toward Elizabeth.

“Miss Elizabeth,” she said in a confident tone Darcy could scarcely recognize. “Would you accompany me?”

Elizabeth received this request with surprised pleasure but confessed that she did not know any duets.

“Then perhaps you would turn the pages for me?” Georgiana asked.

“I should be delighted, Miss Darcy,” came the reply.

Darcy watched as his sister took her place at the pianoforte and began to play, Elizabeth dutifully turning the pages of her music as necessary.

When Georgiana had finished her first piece, no one clapped louder than he. Mr. Gardiner leaned toward him, sharing the settee as they were, and whispered, “She is quite accomplished, sir. Her love of music is obvious.”

“Yes,” he replied. “She has always been musical, and I am happy she finds such enjoyment in the discipline.”

“They make a pretty picture, do they not?” his companion replied. Darcy glanced at him, detecting something in his tone that sounded a bit like his teasing niece. Mr. Gardiner was obviously close to his niece, and their resemblance was occasionally rather striking. Darcy had the sudden feeling that Mr. Gardiner understood his feelings toward Elizabeth quite clearly.

“A very pretty picture indeed,” he replied, not wishing to hide his interest. He watched as Georgiana prepared to play another piece after extracting a promise from Elizabeth that she would play next.

Georgiana played his favorite solo arrangement of Mozart’s Piano Concerto No. 23. When at last Elizabeth sat down to play, she too played Mozart. It was when she began to sing that Darcy felt his heart clench in the familiar pain of desire for that which he could not have. Dear Elizabeth, how very lovely she is. He thought again of her words about him in the parsonage: “… the last man in the world whom I could ever be prevailed on to marry.”

Darcy felt a steely resolve beginning to build within him as he sat there in his family home, watching Elizabeth play. He would show her that he had changed, that her words had been taken with all the seriousness they deserved. And he would win her heart if there was any possibility to do so.

Brigid has been in love with Jane Austen since first seeing the BBC version of Pride and Prejudice as a young girl. She lives in Ohio with her husband and two kids, and spends her free time reading and writing. This is her first Pride and Prejudice variation, though many others live in her imagination. 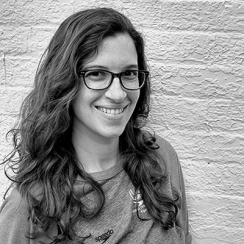 The blog tour for A Chance Encounter in Pemberley Woods is almost at an end, but you can still read all the guest posts and excerpts that were shared in the other blogs. In case you’ve missed them, here is the list of blogs involved in this tour:

September 13 – Babblings of a Bookworm

September 14 – My Love for Jane Austen

September 17 – Half Agony, Half Hope

September 18 – Diary of an Eccentric

September 19 – From Pemberley to Milton

September 21 – My Vices and Weaknesses

Meryton Press is giving away 8 eBooks of Brigid Huey’s A Chance Encounter in Pemberley Woods. To apply to this giveaway, just click on this Raffelcopter link.

30 responses to “A Chance Encounter in Pemberley Woods – Excerpt & Giveaway”