A Good Name- Excerpt and Giveaway

How’s your Thanksgiving so far? Today was a pretty normal day for me, but I hope you are enjoying it with your families and eating a lot 🙂 That’s what we do here in the holidays 🙂

My guest today is an author who is new to From Pemberley to Milton but I hope to see her again in the future because it’s been a please to work with her. I’m talking about Sarah Courtney who has just released a modern P&P story that is very different from anything I’ve seen. If you read the blurb you’ll understand why 😉

I hope you also take a few minutes to read the excerpt because it is totally worth it, will give you an idea of what to expect from this book, and it brings attached to it a giveaway of one ebook 🙂

You may also find interesting to know how Ms. Courtney’s tastes regarding P&P variations have changed. I could easily relate to her because the same thing happened to me. When I started to read JAFF I could not bear to read anything that was not regency, I mean, the characters were created based on regency values right? But the truth is that the more I read, the more I felt the need for new things and nowadays moderns are something I really enjoy too.

Anyway, I digress. Please let us know what you think of the excerpt, and join me in welcoming Ms. Courtney and wishing her all the luck with this release!

George Wickham’s childhood friendship with Lizzy Bennet saved his life. How will it change her future?

Ten-year-old George Wickham was hungry, lonely, and desperate until the day he met Lizzy Bennet. She transformed his life with a peanut butter sandwich and the magic of books. Losing her friendship devastated him, until his meeting with the Darcy family set him on a course to a new life.

Will Darcy insulted Elizabeth Bennet at their first meeting and accidentally injured her a few months later. She is just starting to overcome her first impression of him when something from his past comes to light. Will the revelation of Elizabeth’s childhood friendship with George Wickham change everything? 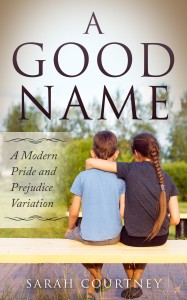 You can find A Good Name at:

When I first started reading Pride and Prejudice variations, I was only interested in Regency stories. To me, the story was intrinsically linked to that setting, and I could not imagine it taking place in any other time or place.

I’m not sure what finally nudged me to give moderns a try, but the first modern that I remember reading was A Searing Acquaintance, by J.L. Ashton. I was immediately hooked, and read several others right afterwards that I loved. It can be a lot of fun to envision Elizabeth and Darcy as competing journalists, or restauranteurs, or gymnasts. My favorites were stories that took a “what if” turn, variations that took the plot in a different direction from the original.

A Good Name was based on a “what if” idea that I had one evening just as I was getting ready to go to bed. I had to write down my notes before I went to sleep and forgot it all. What if there was more to George Wickham than meets the eye? What if he was befriended by young Lizzy Bennet before he met Mr. Darcy, and what if that friendship turned his life around? What would happen when Will and Elizabeth then met as adults? I had a lot of fun with the twists and turns this tale takes, and I hope you will, too!

In this excerpt, Will and Elizabeth have rented canoes for the weekend, and they are about to realize how very different their ideas of “adventure” are. Elizabeth is recovering from an ankle injury but is not about to let that keep her down.

It only took them about half an hour to discover that they should never share a canoe.

“Elizabeth!” Will called to the front. “Steer left! There are rapids on the right!”

Will forgot to breathe until they were through the rapids.

“For crying out loud, Elizabeth, we do not have to go through every bit of whitewater you see! There’s nothing wrong with taking the easy route.”

“Nothing wrong, maybe, except that it’s boring. Come on, Will, where’s your spirit of adventure?” Elizabeth taunted.

He was relieved when they passed without comment by a little creek branch separated from the rest of the river by trees, since it looked rocky and dangerous. He should have known better.

“Oh, Will, we missed an adventure!” she called back. “Quick, turn around and let’s go upstream a bit so we can go in!”

“You know what, Elizabeth? I think we should get separate kayaks tomorrow,” Will said. “We can still paddle close by each other and chat, but you can go through all the rapids and I’ll just coast along in the deeper water.”

She shook her head sadly. “You stodgy businessmen. It’s almost like you value life and limb or something.” She looked at her ankle. “Clearly, I don’t nearly enough.”

They had planned a two-day adventure, spending both Saturday and Sunday afternoon on the water. So Sunday, he rented two separate kayaks instead of a canoe. Will was relieved, as he spent a lot less time fearing for his life and more time enjoying the view and laughing at Elizabeth’s antics―and watching the way her hair sparkled in the sunlight.

The next time he saw a place where a little branch of the river was separated from the rest of it by a stand of trees, he pointed it out to Elizabeth. He loved such little side routes when they were gentle, but he could see the beginnings of rapids at the mouth and figured it was more Elizabeth’s speed than his own.

“Thanks!” she called as she paddled her canoe into the entrance.

Will continued on the main part of the river and waited at the bottom of the little branch for her to exit. When she didn’t appear, though, he grew worried, and after some minutes, he finally paddled against the current upstream to see what had happened. He didn’t really want to follow her, but he got as close as he could to see what happened.

“Hey, Will!” she called when she saw him. He could see her sitting on a cluster of rocks on the little tree-covered island between the branch-off and the river, just a few yards in from the entrance. “A little help, please?”

He had to laugh. She’d somehow managed to tip over her kayak, getting herself completely soaked through. Not only that, but the kayak had managed to turn on its side and get wedged up against a tree on the island, filling with water from the strong current, enough that she couldn’t get it off the tree.

“I don’t even know how you manage to get into such fixes,” he said as he found a safe spot on the river side of the island to wedge his kayak, then climbed gingerly onto the rocks next to the tree.

Between the two of them, they managed to push one end of her kayak until the angle changed enough that the current couldn’t keep pressing it against the tree. He dragged it up a bit onto the rock pile to dump out the water, then he held it while Elizabeth limped over.

“I’m getting hungry,” she said as she gingerly climbed in, careful of her ankle. “I wish we’d thought to bring a picnic lunch. This would have been the perfect spot.”

“If you’d had it in your kayak, it’d have been long gone by now.” Will winked at her. “I do have a granola bar, though, if you’re hungry.” He always had two on him when he wore casual clothes, and of course some in his desk drawer at work and the glove compartment in his car. “Here.”

“It’s all crumbled!” She laughed as she tried to take a bite without sending bits of granola everywhere.

“Beggars can’t be choosers. I don’t see you pulling out a stash of granola bars. Of course, given the way you paddle, that might be a good thing.”

“Squished is better than wet,” Elizabeth agreed. She took a bite and waved at him as she pushed off. “Thanks, Will!” she called as she entered the current. “I’ll beat you to the next mile marker!”

He had to laugh as he carefully stepped back into his kayak, avoiding getting so much as his sneakers wet, while a sodden Elizabeth paddled at top speed back down the river.

Ms. Courtney is offering to one of my readers a copy of A Good Name. The giveaway is international and it is open until the 3rd of Noevmber. To apply to it, please click on the Rafflecopter link.

26 responses to “A Good Name- Excerpt and Giveaway”