Yesterday I started reading Speechless from Jesse Lewis and I could hardly stop, so I’m very happy to receive the author today with a guest post about what appears to be a very promising book!

Speechless starts with Mr. Darcy stranded at an in, which is a very cozy setting that always captures my attention, and Jessie decided to interview its owner, Mr. Timmins, who will be able to give you a very interesting perspective of the books events 🙂

I enjoyed this interview very much and I am really loving the book so far! Iwill be reviewing it next week, so please don’t forget to visit to know my opinion 🙂 Until then, I’ll leave you with Mr. Timmins 🙂

Thank you so much, Rita, for taking part in the blog tour for my new novel, Speechless. It’s a Pride and Prejudice variation that takes place in the winter following Darcy’s initial visit to Meryton. After a terrible accident, Darcy and Elizabeth are stranded together at a remote inn called The Dancing Bear. I hope your readers will enjoy this interview with its proprietor, the lovely Mr Timmins.

Good afternoon, Mr Timmins. Could you begin by telling us about your establishment?

I should be glad to. The Dancing Bear is just outside Spencer’s Cross in Hertfordshire. ‘Tis a little off the beaten track—not your run-of-the-mill coaching inn—but those as wish to drink here always seem to find it.

Mr Darcy certainly found it, and he was in dire need of your hospitality when he knocked at your door, was he not?

I should say it was Death’s door at which Mr Darcy was knocking when he arrived, but he found his way here, and I took him in. There are few I refuse.

Did you have any inkling of his consequence at first?

None at all. The name Darcy was completely unknown to me ’til that day, and there was rather too much urgency to take account of anybody’s airs or graces. Indeed, it would have been mighty tricky for Mr Darcy to present himself as a man of consequence when he was so diligently attending to playing the part of a corpse. It was discovered he was a gentleman in the days following, but such things are not generally accorded much import here at The Bear. If you are thirsty, you are welcome.

A very shrewd policy, Mr Timmins, though I had heard Mr Darcy’s consequence enabled him to liberally bestow his gratitude on all those who assisted him in his time of need, is that not the case?

Mr Darcy has been vastly generous to us, that I shall not deny. Though it is his good word that has benefitted us most. We have enjoyed a great deal more business of late on account of his recommendation.

Could you tell us what your part in his recovery entailed?

Truth be told, very little. I provided a room; I fed and stabled his horse. And what with my sister being snowed out at her mother’s all week, and me not generally being known for my culinary excellence, I dared not venture to prepare him any food. Fortunately, I was not required to serve him in that capacity.

Is it true, then, that Elizabeth prepared Mr Darcy’s meals for him?

Aye, it is. Most of us dined on what my sister had stored away in the kitchen, but Mr Darcy could scarcely swallow his own spittle, let alone cured meat and hard cheese, so he was treated to a special diet of watery broth and my best brandy.

What did you make of Elizabeth?

I was singularly impressed by her fortitude. She went to great lengths to secure aid for Mr Darcy despite having been involved in a dreadful accident herself. His injury was gruesome to behold, too, yet she was not frightened by it—or if she was, she kept her head and showed no sign of it. Stayed by his side almost every hour of the day after that. Mr Darcy is very fortunate in his choice of wife.

[Interviewer coughs] Did they seem like a happily married couple to you, then?

They seemed like a married couple. Happiness is relative. Though in fairness, they did not have a great deal about which to be happy at the time. They had a bit of a spat on the last day that gave us all a chuckle. Especially Mr and Mrs Stratton, who’ve been married a lot longer, I think, and have had their share of vexations.

Can you tell us the nature of their quarrel?

Can’t say as I recall. It was a funny old sort of quarrel in any case, for Mr Darcy was completely mute at the time, and we heard only one side of every conversation they had. His contributions never amounted to more than a few hand gestures and a very limited range of facial expressions, mostly scowls.

They understood each other, though?

Seemed to. Which was useful, for it meant she could translate for the rest of us what he was trying to say. Not that we had much need of that, for the very same day Mr Darcy ventured downstairs, his cousin arrived to whisk him away.

Could you tell us a little about the night Colonel Fitzwilliam arrived?

Very strange affair, that. Arrived out of the blue with half a dozen soldiers and the sort of urgency typical to all men used to being at war. We all thought it unnecessary at first, for Mr Darcy had been drinking with us only an hour before. He had not looked well, admittedly, but he had been conscious, which is the opposite to what he was when the colonel’s men carried him downstairs ten minutes later. The whole party had departed within quarter of an hour, preventing me from making enquiries—and Mr Darcy is not the sort of man one questions, which is why, to this day, I have no notion of what transpired upstairs. Still, you see all sorts when you run a drinking establishment. I daresay I shall see stranger things before my time is up.

A very strange story indeed, Mr Timmins. I should think Mr Darcy and Elizabeth’s version of events would be interesting! Thank you for talking to us. One last question, if you please. Your establishment is named for the large stuffed bear in your taproom. Can you tell us where it came from?

My sister likes to tell the customers it danced all the way across the world and only stopped dancing when it found somewhere it wished to call home, but I do not know about that. All I know is it came with the building. Happen it stopped dancing when someone stuffed it.

Thank you, everyone, for popping in to From Pemberley to Milton today to take part in the Speechless blog tour. Feel free to ask me (Jessie, not Mr Timmins) any other questions in the comments below, or you can interact with me on Twitter (@JessieWriter), FaceBook (@JessieLewisAuthor), or on my blog, (www.lifeinwords.blog). I’d love to hear from you!

Could anything be worse than to be trapped in a confined space with the woman you love?Fitzwilliam Darcy knows his duty, and it does not involve succumbing to his fascination for a dark-eyed beauty from an unheard of family in Hertfordshire. He has run away from her once already. Yet fate has a wicked sense of humour and deals him a blow that not only throws him back into her path but quite literally puts him at Elizabeth Bennet’s mercy. Stranded with her at a remote inn and seriously hampered by injury, Darcy very quickly loses the battle to conquer his feelings, but can he win the war to make himself better understood without the ability to speak?

Thus begins an intense journey to love and understanding that is at times harrowing, sometimes hilarious and at all times heartwarming. 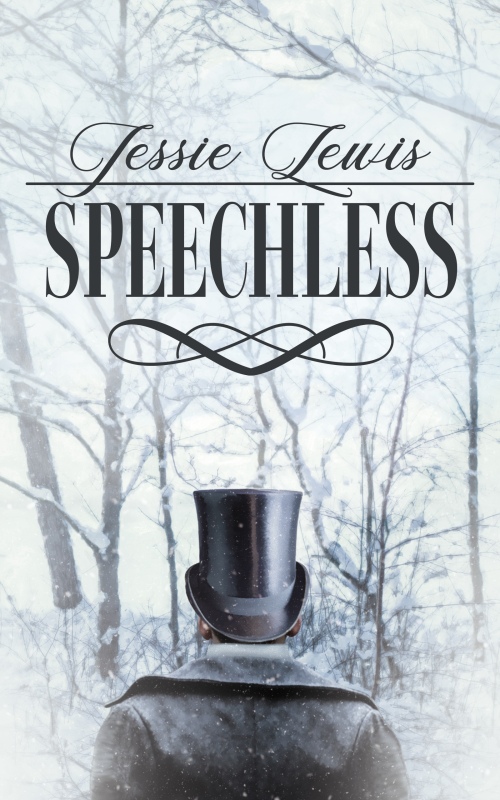 You can find Speechless at:

There are only 3 days left in the blog tour ot Speechless but you can still go back and read the other posts. Here is the schedule if you are interested 🙂

Jessie Lewis, author of Mistaken and The Edification of Lady Susan, enjoys words far too much for her own good and was forced to take up writing them down in order to save her family and friends from having to listen to her saying so many of them. She dabbled in poetry during her teenage years, though it was her studies in Literature and Philosophy at university that firmly established her admiration for the potency of the English language. She has always been particularly in awe of Jane Austen’s literary cunning and has delighted in exploring Austen’s regency world in her own historical fiction writing. It is of no relevance whatsoever to her ability to string words together coherently that she lives in Hertfordshire with two tame cats, two feral children and a pet husband. She is also quite tall, in case you were wondering.

You can check out her musings on the absurdities of language and life on her blog, LifeinWords.blog, or see what she’s reading over at Goodreads. Or you can drop her a line on Twitter, @JessieWriter or on her Facebook page, JessieLewisAuthor.

Quills & Quartos Publishing is giving away one ebook of Speechless per blog tour stop. All you need to do to enter the giveaway is comment on this blog post, and Quills & Quartos will randomly choose winners for the entire blog tour on December 19. So, make sure you join in the conversation!