I am very happy to host a new author at From Pemberley to Milton today, her name is Anniina Sjöblom and she is here today to share an excerpt of her debut novel Thaw.

Approaching a forced marriage scenario, Thaw is definitely on my TBR list and I loved the excerpt Anniina Sjöblom brought us here today. I hope you enjoy it as much as I did and you share your opinion about it with us 🙂 Also, if you’ve already read this book, please do share your thoughts, I would love to know more about it.

I would only like to wish Anniina Sjöblom all the best with this new release, and hope this is only the first of many visits to From Pemberley to Milton 🙂

Thank you, Rita, for inviting me to post an excerpt from Thaw at From Pemberley to Milton as a part of the blog tour! The following is a letter Elizabeth writes to her Aunt Gardiner early on in the story, when everything is still well and she has no idea that only a month later, she will be standing at the altar with the rather discourteous man she has encountered in Netherfield’s library.

I am writing to you from the confines of one of the guest bedrooms in Netherfield. Jane has fallen ill during a visit to Miss Bingley and her sister, and we are under orders from the apothecary not to move her until she is feeling better. Do not be alarmed—it is a rather violent cold, but Mr Jones has assured us that there is no great cause for worry.

I arrived here two days ago after Jane sent us a note explaining that she was unwell. I found her weak and feverish, but quite well cared for. Mr Bingley’s sisters are remarkably adept at forgetting all about her when they are not in her immediate presence but, when they do attend to her, they do so with at least the appearance of affection and solicitude. The only thing the sisters lack in their efforts is sincerity; thankfully, their brother has an ample supply of it to make up for this deficiency.

The more I see of Mr Bingley, the better I like him. His might not be the most intricate of characters, but there is something quite beguiling about the transparent manner in which he expresses himself. When he says that he is full of concern for Jane’s wellbeing, there can be no doubt of his meaning exactly what he says. In his eagerness to please her, he encouraged me to choose any book from his library to read aloud to Jane during her waking hours. You know well my fondness for spying on other people’s libraries, so you can imagine how pleased I was with the prospect!

I admit, however, that my enthusiasm was dampened somewhat as I entered the library. Not because the collection of books was quite meagre—which it was (but Mr Bingley is such an amiable man that I find it difficult to hold against him the fact that he is clearly not a great reader)—rather, it was because his odious friend Mr Darcy had chosen that exact same moment to occupy the library. He barely noted my arrival, so I determined to ignore him to the best of my ability. Oh, Aunt. It has only been a short acquaintance, but I cannot tell you how much I detest the man!

While he did not say a word, I could easily detect that he was staring at me whenever he thought I would not notice. It has been his exasperating habit of late to hover about, staring at me with a satirical eye but not uttering a word if he can help it. I do not understand what he means by it. He has already declared me tolerable—surely there is no need to always be investigating the matter for further proof of my faults!

My vanity told me to choose the most serious, tedious tome available to assure that I would offer him no further cause for reproof to add to my undoubtedly long list of deficiencies. But, as I am sure you can guess, my impertinence led me in another direction entirely. With some pride, I confess that I chose the most shocking novel I could find (from Miss Bingley’s personal collection, I have no doubt!) and, as innocently as I could muster, asked whether he had perchance read it. Oh, how I wish that you could have seen his reaction! His eyes widened in shock at my presumption, and the corners of his mouth turned down in such contempt that I found it very, very hard not to laugh. I must say, I have never heard anyone say ‘Most certainly not’ with such a great emphasis!

Of course, the episode cannot but make me sink further in his estimation. But I do not much care—let him despise me to bide his time in the country!

I shall close now, for Jane has awakened and requires my attention. I much expect to entice a smile out of her with a description of my encounter in the library.

We both send all our love and impatient wishes of seeing you, Uncle, and the children. I shall write to you again in a few days to let you know how Jane’s condition has improved.

It is a truth universally acknowledged that one false step can involve a lady in endless ruin. On a rainy November day in 1811, Miss Elizabeth Bennet finds herself wondering why no one ever bothered to tell her about this.

A few blithe steps on a morning walk, taken after a succession of rain, lead to unexpected events that irrevocably change the course of Elizabeth’s life, placing her fate in the hands of the haughty and conceited Mr. Darcy – the last man in the world she had ever thought to marry.

As long winter days slowly pass, she writes letters to her loved ones, trying to come to terms with her new role as a wife and the Mistress of Pemberley. But can she ever learn to love her husband? Will he overcome his arrogant notions of rank and circumstance?

And most importantly – will the shades of Pemberley ever recover from being thus polluted?

You can find Thaw at:

Anniina Sjöblom lives in the beautiful but cold Finland and works in university administration. She has an MA in History and enjoys a long-standing love affair with the works of Jane Austen.

Her previous works include titles such as Thirteen Days, Fix You and When He Comes Back, published in various online Austenesque forums under the pen name boogima. The new novella Thaw, expanded from the original version of the story first published online in 2011, is her first commercially published work.

When not writing, Anniina spends her time hanging out with friends, binge-watching TV dramas and re-reading her favourite books while the stack of new ones still waiting to be read piles higher on her nightstand. She can ride a unicycle, and once, after losing an unfortunate bet, ate a bowl of ice cream with green dish soap as dressing. She does not recommend attempting it to anyone.

There are only 3 days left in the blog tour of Thaw but you can still go back and read the other posts. Here is the schedule if you are interested : 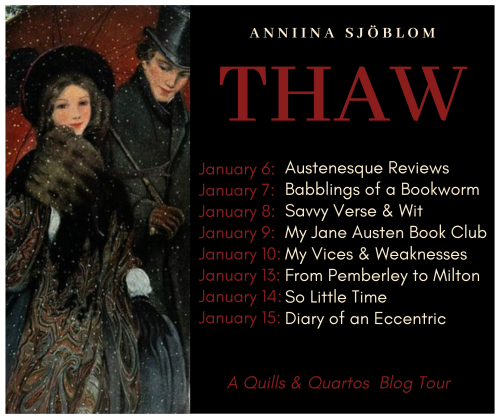 Quills & Quartos Publishing is giving away one ebook of THAW per blog tour stop. All you need to do to enter the giveaway is comment on this blog post, and Quills & Quartos will randomly choose winners for the entire blog tour on January 22. So, make sure you join in the conversation!