Only 13% of readers read exclusively Jane Austen Fan Fiction novels, but even though the other 87% read something else in between, I believe the majority of books people who visit this website read are indeed JAFF. If someone would ask me that question, I would also say I don’t read exclusively JAFF, but the non-austenesque books I read per year is on average around 4 or 5.

This year I’ve read 43 books so I’m expecting to reach 60 at the end of the year, but I had the idea that most of my visitors read even more than I do, so I asked you how many books you read per year. It turns out I was right! Even though 42% “only” read between 0 and 25 books per year, if we sum the percentage of people who read above 50 books per year we get the exact same percentage.

Now, one may think that people who read over 100 books per year may be reading novellas with a reduced number of pages, but the truth is no one expressed their preference to be books below 100 pages.

In fact, the majority of readers share my preference and is more fond of books between 200 and 300 pages. 25% of readers actually prefers books with more than 300 pages, so it appears that readers do prefer longer books to shorter ones. I for one have been growing a special relationship with smaller books:)

But which books are readers really buying? I was almost certain that, just like me, readers would prefer variations over other types of novels, but what do they like to read apart from that? If we were to remove variations of the equation, what would readers like to read most? To try to understand that I asked readers to tell me what is their favourite genre, but also their second favourite. As expected, 66% of readers prefer variations above all others, but there is also a big percentage of people who prefer Austen Inspired novels to all other genres, and this was quite a surprise. 11% is not a high value, but I certainly wasn’t expecting it to be the second type of novel readers prefer, it even comes before sequels which are the favourite genre for 8% of readers.

If we move to people’s second favourite genre we can see that tastes are a bit more diverse and this will provide us the answer to my previous question, if we remove variations out of the equation, what do people like to read? Well, those who did not choose it as a first option chose it now as a second one, so the conclusion is indeed what we were expecting, variations are definitely THE genre people like to read! But on this graphic we can also see that Different Eras, including modernizations are also growing among the community. 25% of readers states that  these are their second favourite genre, and 15% indicates that sequels and Different POV’s are their favourites.

6% of readers states that their favourite genre is Secondary Characters, and 10% states this is their second favourite type of novels, but who are these secondary characters that readers like to know more about? Well, it’s no shocker but I wasn’t expecting such a high percentage! Colonel Fitzwilliam is definitely in people’s hearts! However, there aren’t many stories where he is the main character, are they? I can only think of Colonel Fitzwilliam’s Challenge by Jennifer Joy and When Mary Met the Colonel by Victoria Kincaid. Do you know of any other? Or maybe he is a favourite within a Darcy/Elizabeth story?

Mary Bennet comes second and she is also a favourite of mine! Thankfully there are many books that are centered in Mary 🙂

There was also a big percentage of people answering None of the Above which was completely unexpected to me because most of Pride and Prejudice characters are present here, so maybey people’s favourites are from other Austen novels. I’ll make sure to include that on a future survey 🙂

What about the storyline? What do people like and dislike? I confess the options could have been better but when I added the option Other with the possibility to write something, I was hoping you would tell me your favourite and least favourite plotlines and that I would be able to agregate them per category, and add them to these graphics, but unfortunely WordPress isn’t allowing me to see what you wrote, so we’re stuck with the options I created. I think I’ll need to think this trough a little better next time I do a survey.

From the options I created, clearly the forced marriage scenario and Darcy and Elizabeth stranded somewhere take the lead on people’s preferences, followed by Elizabeth being above Darcy in society, which is funny because that is one of my least favourite plots. The Love Triangle is also the favourite of 8% of people, and with that one I can relate to, I love to have some rivals for their affections in the story 🙂 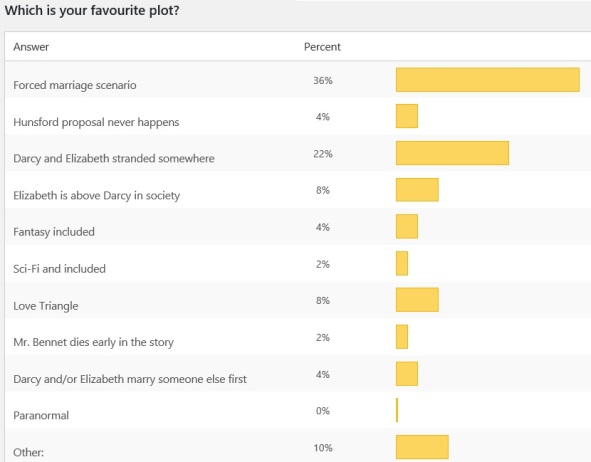 What about the least favourite plots? On this one readers preferences also match my own, 23 % of readers dislike having different pairings, and I’m assuming that’s when it comes to Darcy and Elizabeth, so I obviously agree with that, I mean, Darcy is supposed to end up with Elizabeth and I can’t even think of a book that has a different outcome. If there are books with this plot out there, I’ve never read them. 21% of readers states that Darcy and/or Elizabeth  marrying someone else first is the plot they like the least, followed by them having a child with someone else first, which I believe is my least favourite.

Sci-Fi and paranormal are also amongst readers least favourite plots and that is a pity for me because I love these two genres and I think that bringing them into JAFF would be an added value.

Elizabeth not being a Bennet is no big deal for my readers, and on this one my opinion is a little different, I do like when their circumstances are very close to canon, so when they differ, I tend to dislike the plot.

I was suppose to change the blog layout today, but to be honest, I chickened out.

I have an appointment this evening and I am too nervous and afraid to do this on a rush before leaving home, so I am going to do it tomorrow because it is a non-working day and I’ll have more time to fix some issue that may occur. Plus, my husband told me he wanted to be out of the house when I decided to renovate the blog. In case something goes wrong, he wants to be as far away from me and my screams as possible 🙂 So fingers crossed for tomorrow!

I know I’m probably making a huge fuss out of this, but I am so bad with technology that even something as simple as this is a big thing for me. Anyway, see you all tomorrow and hope to hear from all of you on Sunday when I announce the winners of this week’s giveaway 🙂