I know Pride&Prejudice is Austen’s favourite book for many readers, but what about Sense&Sensibility? How does that stand on your rank? It is my third favourite Austen book and even though there aren’t many S&S books out there, Virginia Kohl is working hard to change that.

After True Love Comes to Delaford, she brings us Adventure Awaits which will give the spotlight to Margaret Dashwood. I think Margaret would grow up to become my type of heroine, so I’m very curious about this book.

Mrs. Kohl is visiting today with an excerpt and giveaway of Adventure Awaits and I hope you enjoy it 🙂

Thank you for visiting Mrs. Kohl! It is always a pleasure to have you here 🙂

Margaret Dashwood, known to her family and friends as Daisy, has always dreamed of going on a grand adventure. With her first Season behind her, those dreams are relegated to the stories she tells her niece.

Dr. Alexander Mallard came to the small village of Delaford straight out of medical school. With the knowledge and desire to help everyone he can, the young man settles into the life of a country doctor.

The day their paths cross, an adventure grander than either ever imagined begins. 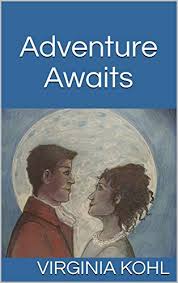 .You can find Adventure Awaits at:

Since writing my debut novel, True Love Comes to Delaford, I knew I wanted Daisy to have her own story. The adventuresome young woman, who dreamed of traveling to exotic locations, would not simply settle for anyone. Could a true love match be found in the village’s new physician?

Running his hand through his short, dark brown hair, Dr. Alexander Mallard sighed in frustration. The bruised and battered man in front of him would simply not listen to reason. The previous week’s severe thunderstorm and a spooked horse had turned the small town’s doctor into his newest patient.

Since finishing medical school and moving to Dorsetshire in the spring, he had found a friend and mentor in the older man. Dr. Grant had taken him along on his rounds, introducing him to patients and the community at large. In the last few months, the four-and-twenty-year-old had gone on several calls alone when the good doctor was not available. However, this was his first time acting as sole physician.

“You will not be able to assist anyone in your current state. What you need now is rest,” he calmly attempted to explain.

Dr. Grant shook his graying head of hair, “I cannot leave you alone. You are not ready, my boy.”

With a smile for the other man’s evident concern, Alexander countered, “I have already taken care of a variety of patients and diagnoses. Besides, if I do not wade out to the deep part of the lake, how am I ever going to learn to swim?”

The past three days had gone by without incident. He hoped that would continue but prepared himself for any eventuality.

Seeing the determination in the younger man’s dark blue eyes, his mentor heaved a resigned sigh. “Very well. If you need me, or my advice, for any reason, do not hesitate.”

“You should concentrate on getting better and not worrying about me. I will check on you when I return this evening,” Dr. Mallard replied, shutting his large black bag with a click.

The moment he made his way over to the bedroom door, Dr. Grant’s maid burst in. Having run up the stairs, the rotund woman took a moment to catch her breath.

“The Delaney’s footman says the Mrs.’ time has come, Sir,” she announced between heavy breaths.

“I have been given strict orders to stay in bed. Dr. Mallard will be handling any calls for the time being.”

Not waiting for the middle-aged woman to repeat herself, Alexander strode through the open doorway toward the waiting servant.

After an initial examination, Dr. Mallard handed him over to Mrs. Delaney. “Congratulations, you have a healthy baby boy.”

Witnessing the miracle of new life would always be one of the most rewarding parts of his profession. He watched the elated parents. Perhaps one day he would be the proud father holding a precious blessing of his own.

Now where did that come from?

Shaking his head to clear the surprising thought, Alexander determined that he must simply be caught up in the emotion of the moment.

Once mother and child were settled, the young physician began to clean and pack up his supplies. His gaze turned to one of the room’s other occupants. Mrs. Brandon had sat down in a cushioned chair to rest, lovingly stroking her rounded midriff. According to Dr. Grant, the Delaney son’s future playmate would be arriving in late autumn. By then the older physician would be able to resume his rounds. Dr. Mallard believed that to be the Brandon’s preference since the other man had been present for the family’s previous blessed event. A knock on the door interrupted his musings.

One of the Delaney’s servants entered the room and addressed the Major. “I apologize for the interruption, Sir. The doctor’s presence is urgently needed.”

Quickly grabbing his bag, Alexander turned to the maid “What is wrong? Whose household am I needed in?”

The young woman wrung her hands while hesitantly replying, “I do not know, Sir. I was only told of the urgency.”

Sensing that she was holding something back, he repeated himself, “I need to know in case there is any risk of infection.”

She looked around at the concerned faces in the room before meeting his gaze. “The footman would rather give the details to you personally.”

“This is ridiculous! I have never heard of such foolishness!” he declared, marching toward the corridor.

If you enjoyed this excerpt, Adventure Awaits is available in both Kindle and trade paperback.

Virginia Kohl has been fascinated with the regency era since discovering Jane Austen’s works at the age of eleven.

Originally from Germany, Virginia Kohl shares her Texas home with her illustrator mother and faithful rescue dog. When not passing her love of learning on to her students, this college math professor enjoys reading, writing, cooking, and being an active member of her local writer’s guild.

Her novels can be found at www.amazon.com/author/virginiakohl and at www.goodreads.com/author/show/17214552.Virginia_Kohl

Virginia Kohl is offering one ebook copy of Adventure Awaits to my readers. To apply to it all you have do to is comment on this post and let us know if S&S is your cup of tea. The giveaway is open until the 17th of August  and the winners will be announced shortly after.

Filed under JAFF, North and South, Pride and Prejudice