I hope you all had a wonderful weekend and that the first days of fall have been kind to you. I am currently on vacations doing a road trip through Portugal so, to be honest, it still feels like summer to me 🙂 I’ve been to many different beaches and I’ve taken the time to read a lot, so many more reviews are coming up 🙂

One of the books that is travelling with me is the first volume of Sanctuary by Cat Andrews and I’ve taken some nice pictures with it, but I haven’t started it yet. I was hoping to start reading it during this road trip but I have now realized I’ve been overly optimistic.

So instead of bringing you a review of book 1, today I am sharing an excerpt of book 3 which has just been released.  I’ve heard lots of great things about this book, and I find the setting very alluring so I am eager to read it. Anyway, I hope you like the excerpt, and please do not refrain from commenting, not only to apply to the giveaway, but also to share your encouragement to Cat Andrews who I am sure will appreciate it 🙂

I would like to thank Cat Andrews for visiting. It is her first time at From Pemberley to Milton, but I hope it is not the last. It has been a pleasure working with such a sweet author 🙂 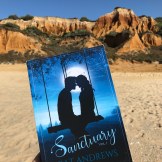 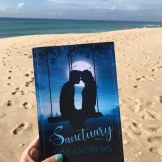 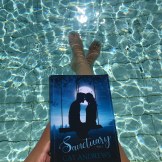 She studied him in the gray, dreary light of the morning, and her heart ached as she wondered how she was going to tell him that once again, the past was forcing its way into the present.

Will Darcy and Elizabeth Bennet are deeply in love, and together with Will’s young son Jack, they are looking forward to their happily ever after on the shores of Great Diamond Island.

For Will, the future has never looked brighter: he’s wild about Elizabeth, has found a best friend in Charles Bingley, and his new consulting business is slowly gaining momentum—as is his fledgling relationship with his father.

Elizabeth, too, is deliriously happy: she’s crazy about Will and is embracing her role as Jack’s “new” mom, she loves her job at the Portland Children’s Library, and is looking forward to having her younger sister Lydia settled close by.

It seems they’ve left their troubled histories behind and are heading into the future as a blissful family of three. But can anyone truly forget—or escape—a past that is determined to reassert itself? Can a new love withstand the forces that seek to destroy it?

Sanctuary is a contemporary love story inspired by Jane Austen’s Pride and Prejudice, but uses Austen’s characters only as a launching point; it is not a meticulous and faithful retelling of the original. It contains mature content and is intended for adult readers.

You can find Sanctuary at: 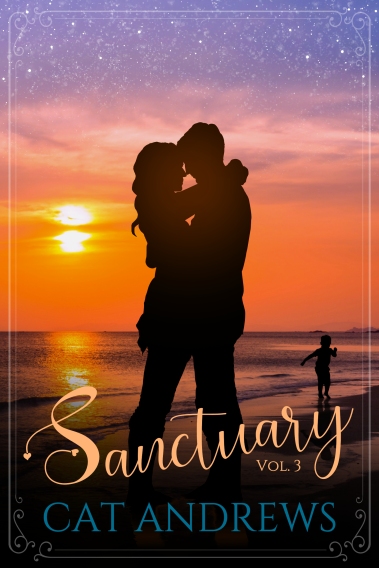 Much of Volume 3 focuses on the rebuilding of the relationship between Will Darcy and his father Robert. They haven’t been close for a very long time – since Will was a child – but they’ve slowly started to work to overcome a past full of anger and hurt. This excerpt is a scene from Chapter 3; an olive branch has been offered, and Robert is visiting Will, Elizabeth, and Jack at their home in Maine for the very first time. This is a conversation between Elizabeth and Robert that takes place when they go on a short walk to the beach with Jack—but without Will.

It was silent for a long moment, the only sounds the waves lapping onto the shore and Jack’s voice as he chattered to himself while playing tag with the waves.

“May I ask you a question, Elizabeth?” Robert asked.

She turned to him, feeling a slight pang of unease. “Of course,” she answered, keeping her expression impassive.

“What are your intentions toward my son?” His voice was calm and matter-of-fact.

“It sounds like a foolish question, but I don’t know you. Not yet.”

She arched an eyebrow. “Your son does.”

“I realize that,” he answered gruffly. “Fitzwilliam is wealthy. A widower with a young son. Smart. Handsome.”

“He’s all of those things, you’re right.” She looked him in the eye, fully understanding what he was alluding to. My son is a prize catch. “But those aren’t the things that drew me to him. Well, I did notice he was handsome.”

She shook her head, her playful expression turning serious. “As you said, you don’t know me. If you did, if you had any idea of what’s made me into the person I am, you would know it’s not Will’s money I want, it’s Will.” Her eyes turned to Jack as he sat in the damp sand, digging up shells and rocks.

“I have everything I want, everything I need, right here. I don’t want more, and I don’t need things. I just need Will and Jack. As long as they’re happy…” She shrugged. “I guess that’s my answer. My intention toward your son is to love him and make him happy.”

Robert was studying her closely, and the expression on his face indicated he seemed satisfied.

“Your son is a remarkable man,” she continued, “and a wonderful father.” She paused for a moment, remembering something from their conversation in the house. “When we were talking earlier, you said I was determined. Will is too, you know. He’s overcome so much—I don’t have to tell you what he’s been through. You’ve experienced it as well, experienced the same loss. It’s too bad you had to go through those losses without each other. Going through them together may have made the grief easier to bear for both of you.”

“Has he told you everything?”

He looked at her warily, and she knew she needed to keep talking and say what she wanted to say, as it might be her only chance.

“I’m having a hard time reconciling you, the man I’ve spoken with today, with the man Will has told me so much about. Unflattering things. Terrible things. It makes me wonder, and worry—not for me, but for Will and Jack. And maybe it’s not my place to ask you this, because Will isn’t my husband, and I’m not Jack’s mother.” She took a deep breath, gathering her courage.

“But now I need to turn your question back to you. I need to know where your heart lies. I need to know that you have the best of intentions where Will and Jack are concerned, because they mean the world to me. They are my world.”

“Please let me finish.” He nodded. “I want to make sure your motives for this reconciliation are what you say they are, that you just want another chance with your son and grandson and want to be part of their lives. Will is putting his trust in you, but it isn’t easy for him.” Her eyes bore into his, trying to read him. “If–if you’re being deceptive or dishonest, it will hurt him deeply. You know that, don’t you?”

“It is your place to ask me, Elizabeth. You have every right to ask and every right to know. I see how much Fitzwilliam loves you, it’s as plain as day. The way he looks at you, the way he talks to you and about you—his feelings are quite obvious. And I can see that you feel the same way about him and that you care for my grandson a great deal.”

His eyes traveled to Jack. “I told you my son is a different man. You know he’s a different man. But I’m a different man, too. I’m not the person I was six months ago. I know I have a lot to make amends for, and some things…it won’t be possible to fix them. I’ve done things I’m ashamed of, and I have to live with that and with the fact that I’ve caused my son a great deal of pain.”

He took a deep breath and turned back to her.

“All I want is a chance to right what I can, to apologize, and to start again. If he gives me that opportunity, I promise you, it will not be wasted, and he will not regret it.” He swallowed roughly. “May I have your trust as well, Elizabeth?”

She looked at him with watery eyes and when she spoke, her voice was soft but firm.

“As long as Will feels he can trust you, I will too. But please, Robert…don’t give us a reason not to.”

Cat Andrews has always been an avid reader, but didn’t discover Jane Austen until her love of a certain British actor led her to the BBC’s 1995 production of Pride and Prejudice, because she just had to know—why all the fuss over this Darcy guy? What followed her viewing of that glorious miniseries was an inhalation of and immediate fixation on all of Austen’s novels, though Pride and Prejudice remains her favorite (and that certain British actor will always be, to her, the quintessential Darcy).

Her discovery of Jane Austen Fan Fiction opened up a whole new world, and thus began her addiction, and months and months of sleep deprivation, as she immersed herself in JAFF. After reading a modern Pride and Prejudice variation that she fell in love with, she was inspired to begin a cautious but earnest foray into the world of writing.

In real life, Cat has spent thirty-plus years working in healthcare. She is a confirmed thalassophile and enjoys life on the shores of Cape Cod, Massachusetts, where she grew up, fell in love with her own Mr. Darcy, and raised a family. More often than not, you can find her at the beach with a book in her hand and her toes in the sand.

Sanctuary is her debut novel and yogu can contact her throught the followinf social media:

Cat Andrews would like to offer one ebook copy of any Sanctuary volume the winner chooses. The giveaway is international and to apply to it all you have to do is comment on this post and let us know what you thought of the excerpt, or your thoughts about the book in general. The giveaway is open until the 5th of October and the winner will be announced shortly after.