The Barrister and the Letter of Marque by Todd M. Johnson – Excerpt

I am very pleased to welcome for the first at From Pemberley to Milton author Todd M. Johnson who has recently released The Barrister and the Letter of Marque. I never read anything written by Mr. Johnson, but I was impressed not only with the premise of this book but also the excerpt he decided to bring to us today. I hope you enjoy it and that you join me in congratulating Mr. Johnson on his new release 😊

I would like to thank him for his visit and Laurel Ann Nattress for inviting me to be a part of this tour.

It took no more than several ticks of the ancient clock hanging above the jurors for the new witness to appear from a side door. But in those few moments, Edmund stood, ushering their client into the seat beside William, then seated himself two chairs farther away. In that same instant, Edmund procured a well-groomed horsehair wig, identical to his own, from the cloth bag beneath the table and placed it on Patrin’s head.

Periwinkle, focused on the new witness in the box, took no notice.

“Mr. Keyes,” Periwinkle addressed the new witness. “You are a hostler, are you not? You care for horses at the Inn of Red Gables near the chemist’s shop?”

The witness coughed to clear his throat, then thrust his chest out importantly. “I do indeed, master.”

“Were you at your job the day there was a theft of goods in front of the chemist’s shop last month?”

“I saw a man come out of the chemist’s and reach in and take a wooden crate from a large wagon there—plain as can be. Then he put it on another wagon, got aboard, and drove away.”

“Very well. And is that man seated at counsel table?” Periwinkle waved an arm in the direction of defense counsel. “With Mr. Snopes?”

“Thank you. Nothing further.”

William rose instantly to his feet. “Which one, Mr. Keyes?”

The witness stiffened. “Which one what?”

“Which one? Which of the gentlemen seated at my table was the perpetrator of the theft?”

Periwinkle’s eyes shifted to the table, where Edmund had now slid off his robe, resting it behind Patrin’s chair.

“Why, I object!” Periwinkle shouted, seeing the three wigged men.

The magistrate stared across the room, taking in the sight. “This is most inappropriate, Mr. Snopes,” the judge bellowed. “You’ve cloaked the accused as a barrister.”

“My lordship, I cannot see why that would offend. While a barrister must be properly wigged in the courtroom, I know of no admonition against a party wearing such a wig as well.”

“But you’re clearly attempting to confuse this witness.”

“Not at all, your lordship. I’m simply trying to determine whether this witness—critical to the prosecution—really knows who he is accusing of the serious crime of theft.”

“Mr. Plessing, this is simply not done!” Periwinkle objected.

The judge’s eyes shifted to sear the prosecutor like hot coals.

“I am Justice Plessing today, Mr. Periwinkle. Or your lordship. However you might address me at a club or at a card game, you will kindly not forget to address me appropriately in this setting.”

“Your lordship,” William chimed in. “Perhaps a compromise might be agreed upon. What if you were to direct both the accused and my assistant to stand and remove their wigs. That would provide Mr. Keyes a fair chance to view them as he would have seen the culprit that afternoon.”

Perhaps he wouldn’t have agreed minutes before. Now Judge Plessing contemplated the room like a circling hawk, his nasal breaths filling an expectant silence in the gallery that a parson would have envied.

“Very well,” the magistrate said. “The two gentlemen at defense table besides Mr. Snopes will stand and remove their wigs.”

Edmund and Patrin were nearly the same height, but as Edmund rose, he crouched just a bit where he stood, still several chairs down from William. His hair beneath his wig was deliberately grown out and cut ragged, while their client’s was coiffed and oiled. Patrin’s shirt was finely pressed and spotless; Edmund’s, now fully revealed, carried stains of several meals.

“Why, it’s him.” Keyes squinted. “Surely as the sun rose this morning!” He extended a finger pointed directly at Edmund. “That man stole the other’ns goods from that wagon. I saw him with my own eyes. Plain as can be.”

“This is unfair! This is an ambush!” Periwinkle cried out amid gasps and shouts from the gallery.

Leaning across their client to address Edmund, William allowed himself a small smile. “I believe that’s the best summation I’ve ever heard old Periwinkle give.”

As a barrister in 1818 London, William Snopes has witnessed firsthand the danger of only the wealthy having their voices heard, and he’s a strong advocate who defends the poorer classes against the powerful. That changes the day a struggling heiress, Lady Madeleine Jameson, arrives at his door.

In a last-ditch effort to save her faltering estate, Lady Jameson invested in a merchant brig, the Padget. The ship was granted a rare privilege by the king’s regent: a Letter of Marque authorizing the captain to seize the cargo of French traders operating illegally in the Indian Sea. Yet when the Padget returns to London, her crew is met by soldiers ready to take possession of their goods and arrest the captain for piracy. And the Letter—-the sole proof his actions were legal—has mysteriously vanished.

Moved by the lady’s distress, intrigued by the Letter, and goaded by an opposing solicitor, Snopes takes the case. But as he delves deeper into the mystery, he learns that the forces arrayed against Lady Jameson, and now himself, are even more perilous than he’d imagined.

You can find The Barrister and The Letter of Marque at:

Todd M. Johnson is the author of three legal thrillers: The Deposit Slip (2012), Critical Reaction (2013), and Fatal Trust (2017), and The Barrister and the Letter of Marque (2021), his first foray into historical mystery. He has been a practicing attorney for over 30 years, specializing as a trial lawyer. A graduate of Princeton University and the University of Minnesota Law School, he also taught for two years as adjunct professor of International Law and served as a US diplomat in Hong Kong. He lives outside Minneapolis, Minnesota, with his wife and daughter.

The Blog Tour for The Barrister and the Letter of Marque is just starting, so don’t forget to follow it to know more information about the book.

Aug 02 From Pemberley to Milton (Excerpt)

Aug 05 Reading is My Superpower (Review)

Aug 06 Among the Reads (Excerpt)

Aug 11 By the Book (Interview) 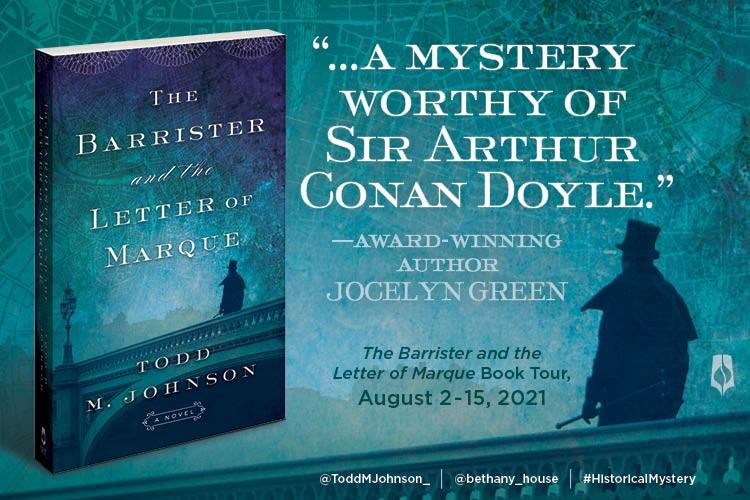 Filed under JAFF, North and South, Pride and Prejudice

5 responses to “The Barrister and the Letter of Marque by Todd M. Johnson – Excerpt”