As a Proper Lady Would – An Interview with Bronwen Chisholm & Giveaway

I am pleased to welcome Bronwen Chisholm at From Pemberley to Milton today. Bronwen has just released a new book called As a Proper Lady Would, which is the first book in the Defying Propriety Series, and has agreed to answer a few of my questions about it. If there is anything else you’d like to know about this book, please do not hesitate to comment and ask Bronwen. I am sure she will love replying to all your questions, and all comments will be eligible for the e-book copy of As a Proper Lady Would she is giving away 😊

Hi Rita! I am so pleased to be back at From Pemberley to Milton and that we get a chance to chat this time.

Welcome Bronwen, it is a pleasure to welcome you here at From Pemberley to Milton. I always like to know more about the authors who are visiting, so I am very curious to know how you discovered JAFF, and how you decided to start writing in the genre.

Well, unlike many of your readers, Jane Austen was not required reading when I was in school. Around my 40th birthday, I was working with a younger woman who talked about the 1995 Pride and Prejudice with Colin Firth. She was shocked that 1) I had not seen it and 2) I had never read the book or seen any of the movies. The next day the VHS tapes were on my desk (yes, I just dated myself). I watched it that weekend and was hooked. On Monday, she and I walked down to the library––which happened to be on the first floor of our office building––and I borrowed the book. Within two weeks, I had read all six books and purchased those that were not available at the library. When I was done with those, I wanted more. I did a search and found the JAFF sites.

I was already writing at that time but had not published anything. I had a suspense romance that had a lot of issues, and I was teaching myself different writing styles. My JAFF stories were originally done to improve my writing and not meant to be shared. When I did share them on one of the sites, I was shocked by the response, and it gave me the courage to publish.

That is a really interesting story, do you feel any difference in your writing now that you know your work is going to be published?

I take my readers into consideration when I pick the stories I want to write, and I listen to their suggestions and work them in where I can. My family will tell you I am a grammar nut. (My kids hated when I proofed their homework, but they still send me things to read before they submit them.) I am even more critical on my own writing when I plan on publishing it.

And if I understood correctly, you have another job apart from writing, how do you combine both?

I have an amazing boss. There is a lot of down time at my job, and he lets me write when he doesn’t have anything for me to do. His name is Fitz, so there will always be a Fitz in my stories. Luckily, I have more than one to choose from with the P&P characters.

Your latest book, As a Proper Lady Would is part of a series, why did you decide to move from stand alones into novels which are integrated in a series?

I fought doing a series for a long time. We have all had that series that we loved when it started, but you have to wait for the next book to be released and eventually you start getting bored with the characters. I didn’t want to be one of those authors. That is why I say the characters made me do it. I got to what I thought would be the end of the book and discovered one of my side characters had a secret that couldn’t be addressed in one chapter or an epilogue. I had to write a second book. Then I realized he wasn’t the only one, so I became more comfortable with the idea.

Does this mean we should expect to have different main characters in each of the series books?

Yes. And they will be a mix of Austen’s characters and my own.

And what can you tell us about this As a Proper Lady Would?

The story begins in Derbyshire when 5-year-old Elizabeth Bennet and her family are there for her uncle’s wedding and she has a brief encounter with 12-year-old Fitzwilliam Darcy and his friend. From there, we get glimpses of them as they grow up until we arrive at the point that Mr. Bingley leases Netherfield Park. Because of interactions they have had previously, the story then plays out a bit different from canon.

Is it safe to say the first book in the series is very Lizzy/Darcy centric?

Oh yes, definitely. I got them out of the way up front, so everyone isn’t waiting for them to get their HEA. This way, they can pop in and out of the other stories.

Apart from that, what do you think readers will love the most about it?

I think they will fall in love with our dear couple as children and see them in a slightly different light. (I was amazed at how Lydia-like Lizzy could be when she was younger.)

Those scenes must have been very fun to write, and I wonder, which was the hardest scene for you to write? Did you find any roadblocks while writing this book?

Honestly, this book really flowed. The first real hitch was when I realized it was going to be a series. Now emotionally, the second chapter had me in tears. Even when I was editing it, I was sniffling.

And how was your writing process during that time? Do you write the entire story at once or do you write separate scenes and then try to put them together? What can you tell us about that?

Every story I write begins with a scene, then I have to figure out where it goes in the story. If it is the beginning, great! I can just keep writing. If it is the middle, then I have to figure out what comes before. I try not to jump around too much because it can become confusing, and you have to remember what was revealed and when. That said, I am not an author who plots everything out. My outlines look more like a series of scenes with notes between them because when I try to plot, I get sucked into a scene and just write it.

I can easily imagine scenes popping in your head, but I’m certain some characters make their way into your imagination more than others, which character would you say inspires you the most?

Ooh. That’s hard. Each of the characters matures as the story progresses. They come to understand what is really important to them. Inspires . . . hmm . . . maybe Darcy. I leaned more into the shy Darcy in this book. You get to see him in different social situations and how his friends try to assist him. He hates it, but he keeps going back because that is what is expected, and he really does want to improve.

And do you prefer to write about existing characters, or to create new ones?

Both. Of course, the readers have certain expectations regarding Elizabeth and Darcy which I learned the hard way at the beginning, so you have to be careful what liberties you take there. I love writing about the side characters that Jane Austen didn’t say much about. There is so much more freedom. But I also love creating new characters to come alongside the ones we all know and love.

Which secondary characters will we find the most in the series?

Well, the second book is called Son of an Earl and revolves around Ashton Fitzwilliam, Viscount Grayson. The lady has not been introduced yet. The third book is A Soldier’s Tale, which comes from the original scene that started this whole project, that I never intended to write. It, of course, follows Colonel Fitzwilliam. His lady will be revealed by the end of the current book. The working title for the fourth is Reforming a Scoundrel and I will let you guess who that one is about. It looks like Lydia will have her own story, and that is all I have at this point.

It looks like your readers will have a lot to expect from these series Bronwen! Thank you so much for taking the time to answer all my questions and giving us more information about the Defying Propriety Series.

We are formed by experiences of our childhood. Family and friends influence our character. Decisions, wise and foolish, direct our path. Through chance encounters and early introductions, our beloved Pride and Prejudice characters come together on a slightly different path which may, to some, defy propriety.

All the books in this series are sweet, clean romances.

In this first book of the Defying Propriety Series, we watch as Elizabeth and Darcy learn what society expects of them, while attempting to achieve what they truly desire in life. The well-known characters, as well as a few new ones, grow from childhood to a marriageable age; some reveal different facets of their personalities, while others are doomed to follow the same paths.

You can find As a Proper Lady Would at: Amazon.com Amazon.co.uk . .

Bronwen Chisholm has released seven Pride and Prejudice variations since 2014. She takes great pleasure in searching for potential “plot twists” and finding the way back to a happy ending.

Her love of writing has led her to several writing groups, and she is currently serving as the vice president of the Riverside Writers and organizes the Riverside Young Writers.

For more information, visit her at www.bronwenchisholm.com.

Now, a GIVEAWAY! Just make a comment on this blog and Rita will pick 1 lucky winner to receive an ebook copy of As a Proper Lady Would. The giveaway is open until the 17th of October and the winner will be announced shortly after that.

Good luck! I can’t wait to read your comments. 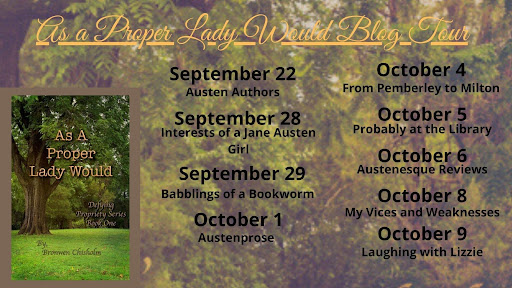