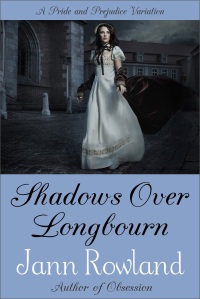 Shadows Over Longbourn is a Pride and Prejudice variation that strays away from canon. The book starts 4 years before the original story with a widowed and very ill Mr. Bennet contacting a distant cousin to ask him to become the guardian of his daughters, and this way saving them from a cruel fate at the hands of his evil cousin Thaddeus Collins, who is bound to inherit Longbourn. The distant relation that comes to the Bennet family’s aid is none less than our very own Mr. Darcy!

By accepting to become the girls’ guardian, Mr. Darcy is forever changing their fates. Lydia and Kitty are still at a very young age and for that reason it is still very easy to teach them proper behavior, especially as they receive the same education as Georgiana. And their presence will be determinant in the Ramsgate incident. In fact, this variation of the incident was one of the most interesting I’ve ever read. Lydia goes with Geogiana to Ramsgate and she is the one reporting Mr. Wickham’s plan to Elizabeth. One would never say that Lydia Bennet would be the responsible one protecting foolish Georgiana, or that Georgiana would be the impertinent brat refusing to behave properly, but that is precisely what occurs. This scene also impressed me due to Elizabeth’s behavior. She remained true to herself but was not as tolerant as I see characters behave in other variations, and I really enjoyed it because I always feel characters are frequently too forgiving and tolerant towards Georgiana. Usually she is poor Georgiana and Lydia is foolish Lydia when in fact they both considered doing the exact same thing: to elope with a man they believed themselves in love with. Well, this book is a refreshing change in that aspect and Elizabeth was very firm in her reaction to Georgiana.

Jane and Mary’s life’s are also influenced by this change and they soon find their perfect matches. I won’t say too much, but I did enjoy the husband Mr. Rowland found for Mary.

And then…we have Mr. Darcy and Elizabeth whose fates were also changed… Well, not exactly changed because they will obviously have their HEA, but the path they took to achieve it was quite different. I have been a proud member of the “Let’s torture Elizabeth club”, and this was definitely the best book in that area! On this variation Elizabeth will be living with Mr. Darcy at Pemberley since she is 17, so she soon realizes how he truly is, and obviously, falls in love with him. However, he will only see her as his ward, so Elizabeth will suffer from unrequited love for pretty much the entire story (big smile on my face right now), how’s that for a change?

Shadows Over Longbourn really surprised me because I wasn’t expecting, based on the premise, that I would love it so much, nor was I expecting to not want to stop reading it since the very beginning, but after chapter one I could not stop. I was not certain that I would love a variation were love between Mr. Darcy and Elizabeth would grow very slowly, not that I like the plots with love at first sight, I don’t. My favorite books are those that show us why the characters fall in love with one another, that show us why they are so well suited for each other. But still, I wasn’t sure I would like to see Mr. Darcy watch Elizabeth grow from a teenager to a grown woman. However, this plot ended up being just perfect! We were given a rare gift, which is to see Mr. Darcy slowly understating how Elizabeth is perfect for him and how she suits him so well, how his life would not be the same without her.

This may seem a bit out of context but I’m sure some of you already know I am a big fan of The X-Files, even more addicted to it than I am to JAFF, and I cannot resist quoting a Dana Scully line (it’s becoming a habit on this blog, I know) because I believe it describes exactly what Jann Rowland transmitted in this book:

“It seems to me that the best relationships– the ones that last– are frequently the ones that are rooted in friendship. You know, one day you look at the person and you see something more than you did the night before. Like a switch has been flicked somewhere. And the person who was just a friend is… suddenly the only person you can ever imagine yourself with” – Dana Scully, Ep. 6×07

Summing up, Darcy and Elizabeth have a complicity rarely seen on a JAFF book and that could only exist after spending so many years together, which makes the premise quite perfect.

Something else I loved about this book was that Jann Rowland took the time to present us all the characters in the book, and to let us know their personality. He was able to characterize them through their speech and actions instead of just describing them himself, and this shows a true literary talent.

I believe the author is quite aware of human nature, of people’s characters, their qualities and faults and transmitted them all into this book through the display of a diversity of personalities and reactions. I know some people didn’t like Mr. Collins senior in this book, but to me the most annoying was Miss Bingley, she was the one truly insupportable, but the fact is, there are people like that in the world, and this book just portrayed the human nature in its several variants.

The only 2 things that kept me from rating the book 5 stars were first the long dialogues between characters and the description of their actives, etc. While this was clearly an added value to the story, it also made it a bit slow paced for my taste; and second, I thought Mr. Darcy was not so proud as we would expect when he first met and talked to the girls.

But Shadows Over Longbourn was so far the surprise of the year for me. I loved it and highly recommend it!

You can find Shadows Over Longbourn on:

Curious about the book? Don’t miss the Blog Tour:

April 27/ Interview Post & Ebook Giveaway at Babblings of a Bookworm

May 5/ Book Review & Ebook Giveaway at Half Hope, Half Agony

May 26/Book Review & Ebook Giveaway at From Pemberley to Milton

May 30/ Book Review & Ebook Giveaway at Diary of an Eccentric

What about the author? Have you read anything else from him? Find our more below:

Jann Rowland is a Canadian writer. He enjoys reading and sports, and he also dabbles a little in music, taking pleasure in singing and playing the piano.

Though Jann did not start writing until his mid-twenties, writing has grown from a hobby to an all-consuming passion. His interest in Jane Austen stems from his university days when he took a class in which Pride and Prejudice was required reading. However, his first love is fantasy fiction, which he hopes to pursue writing in the future.

He now lives in Alberta with his wife of more than twenty years and his three children.

To connect with Jann, check out the following links:

That’s right! Mr. Rowland brought and e-book copy of Shadows Over Longbourn to offer to one lucky winner. All you have to do is leave a comment on this post and let us know what you think of this or any other of Mr. Rowland’s books.

The giveaway is international and it’s open until the end of the blog tour on June 2nd.

Filed under 4.5 stars, Pride and Prejudice

32 responses to “Shadows Over Longbourn & Giveaway”