I’m very pleased to be welcoming Catherine Lodge on From Pemberley to Milton to present to you an excerpt of her debut book Fair Stands the Wind .

Her blog tour has started a few days ago and so far I’ve seen many interesting posts, I hope you find this one just as enjoyable. Don’t forget there is a giveaway going on, and please follow the blog tour because I’m sure there is much more to come 🙂

But what if Mr Darcy is the second son, sent to sea at a young age? What if Elizabeth is trapped by circumstances, with an ill father on one side and an understandably desperate mother on the other?

Meet Captain Darcy of the Royal Navy, a successful frigate captain, with ample prize-money and a sister he needs to provide for while he is at sea. Meet Elizabeth Bennet, who needs a husband and is trying to resign herself to Mr Collins, the worst “least worst alternative” in the history of literature.

Hepzibah Dalton cries herself to sleep every night. She knows it is horribly ungrateful and unchristian and all the other uns the Reverend Carter talked about, but she’s only 14 and she wants her Ma.

She misses Ma and Da and Jackie, and Toby, and Mary, and Carrie. She never wanted to go into service. Da always said she was going to be apprenticed as a dress-maker. She’s always liked pretty things and she’d been making dresses for the little ones dollies for years. She wanted to sit in the back of Mrs Finch’s shop, surrounded by the bolts of cloth and the little drawers with buttons and tapes in. Instead she has to carry the slop buckets and make the fires and polish things, so many things. Her arms ache and hands are all cracked and sore.

She turns over in bed and hears to straw crackle beneath her. It could be worse, she knows it could be worse. Cook told her about Martha who’d had the job before her. She’s been caught stealing feathers from one of the ladies’ beds to sell and been turned off without a character. Terrible things happen to girls turned off without a character. Hepzibah doesn’t quite understand what the terrible things are, although it has something to do with babies. She is terrified of being turned off so she works as hard as she can but she’s so tired all the time and she doesn’t really know what she is doing. She helped Ma about the house, but it’s not the same in a gentry house, there’s so many things she might break. The big clock in the hall stopped while she was dusting the swinging bit, and she had been terrified – before she gave it a poke and it started again. She doesn’t think her ladies would turn her off for breaking something, they’re only young and they don’t shout, but she isn’t sure.

Maria is snoring in the other bed. Carrie and Mary didn’t snore. They used to have the attic room to themselves and she used to tell them stories as they huddled under the covers. Ma had made the quilt before Toby was born, bits and bobs of old dresses and shirts and left-over scraps Mrs Finch gave her. She always had the blue patch under her chin when they pulled it up. There was a faded patch from where she used to chew it when she was a little ‘un.

She tries to remember what she learned in the Dame School, but it is all draining away, she can feel it. I before E except after C. 30 days hath September. April, June and November. Seven eights are fifty six. Noah and his ark. She hopes the Vicar doesn’t expect her to believe the bit about the Ark. You’d never get all the animals in the world into one boat. Jackie knew all the animals in the woods and all the birds and the fish in the river. When you knew how many there were round here, you’d never believe that they’d all fit in one boat. You’d never get Hoggart’s bull to go on a boat and be quiet for a start. Let alone all the animals in foreign places. Lions and elephants and the things she’d seen on Mrs Finches teapot that had come all the way from Staffordshire – wherever that was.

She sighs and tries not to think about Ma and Pa. At least the food is good. She can still smell the meat pie they’d had for supper. Cook knew what she was doing, and she said she’d teach Hepzibah when she got more used to the job. Perhaps she could be a cook if she couldn’t be a dressmaker. Cook got 15 pounds a year, and an allowance for tea and sugar. If she had 15 pounds a year she could go see the others. She knows Toby is all right. One of her ladies had said something to Mr Bingley and got him moved to the stables, where he should have been all along. It was just like the gentry, they thought everyone could go anywhere. Toby should never have been in the house to start with. But Jacky is over a Stowe Park and Mary and Carrie are somewhere in Hatfield but she doesn’t know where. They’re lucky. They’re together. But perhaps, never time she goes to the shop for something Cook has left off the order, she could ask. Or perhaps Mr Puttnam would ask at the Eagle and Child. He looks scary but Maria says he’s nice. She thinks Maria fancies Mr Puttnam, wooden foot an all.

The moon is out and she can see her dress at the end of the bed. It’s quite nice for all the Vicar said she had to wear black when Ma and Pa died. It had been much too big when she got it, but it’s getting to be a better fit. Cook’s meat pie and that broth she keeps making Hepzibah drink to make her stronger. They have better table beer than she’s used to too.

She wants to go to sleep. The main lady wakes up ever so early and though she isn’t like some Cook’s told her about, wanting everything ready and waiting the minute she stirs, Hepizbah knows there’s so much to do in the house and only the three of them to do it. She remembers the poem on the sampler she’d seen downstairs. “Early to bed, early to rise, makes a man healthy, wealthy and wise.” She doesn’t believe a word of it. It just makes you tired if you can’t do the early to bed part.

She shake herself – no used crying. What can’t be cured must be endured, as Mrs Finch says. She stretches out and pulls the blankets up to her ears. She isn’t cold, she isn’t hungry and lots of folk are both. Maybe it’ll get better once she’s more used to it. She falls asleep eventually, chewing on a blue patch of quilt that isn’t there.

Catherine Lodge is a semi-retired lawyer and lecturer, living in Yorkshire–a part of the UK even more beautiful than Derbyshire. One of five daughters, although by birth order regrettably the Jane, she found 19th Century literature early in her teens and never looked back–even if that meant her school essays kept coming back with “archaic!” written in the margin next to some of her favourite words. She still thinks that “bruited” is a much nicer word than “rumoured.”

After years of drafting leases and pleadings, she finally started to write for fun in her forties and has never stopped since. Much of this will never see the light of day, having been fed to the digital equivalent of a roaring bonfire, but “Fair Stands the Wind” is the first book she thinks worthy of public attention.

She spends her day fixing computer problems for friends and family, singing in her local choir, and avoiding the ironing 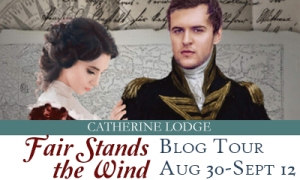 09/07   From Pemberley to Milton; Guest Post or Vignette, Excerpt, GA

Meryton Press is offering 8 ebooks to readers following the blog tour. Readers may enter the drawing by tweeting once a day and daily commenting on a blog post or review that has a giveaway attached for the tour. Entrants must provide the name of the blog where they commented. Remember: Tweet and comment once daily to earn extra entries.

A winner may win ONLY 1 (ONE) eBook of Fair Stands the Wind by Catherine Lodge. Each winner will be randomly selected by Rafflecopter and the giveaway is international.