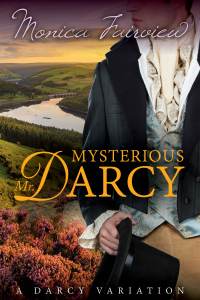 Today I am welcoming for the first time at From Pemberley to Milton author Monica Fairview who brings an excerpt of Mysterious Mr. Darcy for your delight. This book is not yet for sale, but it began as a WIP called When Pride Prevails that Monica decided to publish this year.

I do hope you like this excerpt and if you are too eager to wait for the release date, you can start following this story at Austen Variations where the author has already 6 chapters published.

I would like to thank Monica for visiting, I hope this is the first of many visits to talk about your work !

Thank you, Rita, for this lovely opportunity to visit From Pemberley to Milton. I have enjoyed reading about various authors who have visited here, and it’s a pleasure to find myself among them. It’s a great opportunity to get to know some of your readers as well.

Mysterious Mr. Darcy is a bit of a departure for me. I generally write comedy, some of it rather outrageous, as is the case with my Steampunk Darcy, which is a futuristic novel about a descendant of the original Darcy, though they have a few things in common.  Usually I like to “make sport” of the characters, Jane Austen style, and I find it hard to take them too seriously. This variation, however, is (mostly) serious, with a Darcy who is troubled not only by his past but by the present. It has consequently been a very unexpected kind of novel for me, and I have found myself stumbling across unexpected situations around every corner.

One of the most challenging things about writing Mysterious Mr. Darcy – as is the case in many variations – was how to twist the original story to fit with the new premise. In a novel where Mr. Darcy plays second fiddle to Mr. Bingley, I often found myself falling back into familiar territory, then having to pull myself away as I realized that the story had to take a different direction. The fact that Mr. Darcy appears in Meryton incognito makes a huge difference to how he is perceived. It was fun to look at Darcy from this new perspective, even though the situation did actually make him profoundly uncomfortable.

For example, in this excerpt, it is Elizabeth who goes to Netherfield, not Jane, which makes the dynamics quite different.

When dinner was over, and it was time for Elizabeth to leave, she found herself at a loss. Without a way to return home in the dark and rain, as Mrs. Bennet had predicted, Miss Bingley was obliged to offer Elizabeth hospitality for the night.

Elizabeth, meanwhile, would much rather have gone home. Miss Bingley was more gracious as a hostess than as a guest, but Elizabeth had spent more time than she would have liked in her company. The friendship Miss Bingley had claimed existed between them had not blossomed during this period. The conversation had been lively at the beginning but became more strained as the dinner progressed. They all soon discovered they had very little in common and were forced to engage in small talk. Although they were still maintaining a civil conversation, the Bingley sisters seemed to be taking it in turns to yawn, and they were making no effort at all to conceal their boredom.

“Thank you, Miss Bingley,” said Elizabeth, responding to the offer of having a chamber made up for her, “but if I may, I would prefer to see if the gentlemen return early. If they do, I can use their carriage to go home.”

“We cannot predict when the gentlemen are coming back, Miss Bennet.” Mrs. Hurst jingled her bracelets and turned them round and round her wrist. “You know how it is with gentlemen and cards. They could be at it for hours. We had better have a room prepared, just in case.”

A half hour passed and the yawning increased. Elizabeth began to think it was a bad idea to adhere to her original plan. By now they had all fallen into silence, and since they had nothing more to say to each other, the Bingley sisters were seated at the piano, playing a duet half-heartedly.

Elizabeth was about to confess herself ready to retire when a carriage drew up.

“Ah, my brother is back!” Miss Bingley jumped to her feet, looking relieved.

A few minutes later, Mr. Bingley came running up the stairs and strode into the room.

“The butler told me you were here, Miss Bennet. What a delightful ending to the evening!”

As always, Elizabeth was charmed by his enthusiasm. “Thank you, Mr. Bingley. Unfortunately, I cannot linger. I was about to take my leave. I have been waiting for the carriage to take me home.”

“It’s pouring cats and dogs outside, Miss Bennet. You can’t consider going out at this time of the night, especially in this weather.”

Mr. Darcy entered the room at this point and bowed to Elizabeth.

“You are thinking of leaving, Miss Bennet?” He looked grave. “The weather is unpleasant. The wind has picked up. I would not advise going out. In fact, we returned early because of the inclement weather.”

That clinched the matter. It would be foolish to make a point of leaving. It would be bordering on rudeness and might imply that she could not endure her hosts’ company a moment longer. Besides, she had already suffered a soaking. She wasn’t eager to face the elements again, in a cold and rattling carriage buffeted by the wind.

“If you do not advise it, Mr. Darcy, then I will take your advice, along with Mr. Bingley’s.” She turned to her hostesses. “Thank you. I accept your invitation.”

“And you must plan to stay for dinner tomorrow as well,” said Mr. Bingley.

Lizzy did not know what to say. She did not enjoy the company of either Mr. Darcy or the Bingley sisters, but Mr. Bingley’s sunny smile won her over. It would be an opportunity to know him better and to see him in his own home. It might also help her to determine if his interest in her was serious.

“Thank you, Mr. Bingley. I will send a note to my parents in the morning to let them know I will be delayed.”

The blazing smile he gave her was more than enough reward.

Monica can be described as a wanderer, opening her eyes to life in London and travelling ever since. She spent many years in the USA before coming back full circle to London, thus proving that the world is undeniably round.

Monica adores the Regency period and Jane Austen’s wit. She writes funny Jane Austen sequels and variations but has finally decided to get serious about Elizabeth and Darcy. At the moment, she lives with two cats, a teenager, and her own Mr. Darcy. She enjoys singing out of tune in the shower, visiting historical mansions, and warm weather. 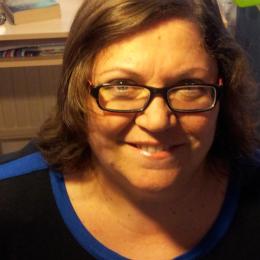 Monica will be visiting other blogs, so please stay tuned and check out the below sites for more information on Mysterious Mr. Darcy 🙂

19th February Diary of an Eccentric

1rst March From Pemberley to Milton

12th March Babblings of a Bookworm

To enter the giveaway all you have to do is comment on this post until the 15th of March and give us your opinion on the excerpt. The winners will be randomly selected and announced shortly after. The book will be sent out to the winners as soon as it is released.