The Bride of Northanger- Excerpt

I’m very happy to be sharing an excerpt of The Bride of Northanger with you today. There aren’t many Northanger Abbey inspired novels and this new novel from Diana Birchall appears to be perfect for this time of the year. I always considered Northanger Abbey had a lot of potential for gothic variations, which is perfect for Halloween, and that is exactly what I’m expecting from this novel, apart from a great character development of course.

What about you? Are you Team Tilney? Does Northanger Abbey spike your interest? I hope so, and I hope you enjoy the excerpt we have here today 🙂

A happier heroine than Catherine Morland does not exist in England, for she is about to marry her beloved, the handsome, witty Henry Tilney. The night before the wedding, Henry reluctantly tells Catherine and her horrified parents a secret he has dreaded to share – that there is a terrible curse on his family and their home, Northanger Abbey. Henry is a clergyman, educated and rational, and after her year’s engagement Catherine is no longer the silly young girl who delighted in reading “horrid novels”; she has improved in both reading and rationality. This sensible young couple cannot believe curses are real…until a murder at the Abbey triggers events as horrid and Gothic as Jane Austen ever parodied – events that shake the young Tilneys’ certainties, but never their love for each other… 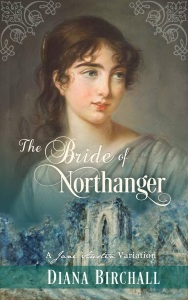 You can find The Bride of Northanger at:

The dogs’ barking outside awoke Mrs. Henry Tilney, and she opened her eyes just at the moment her new husband opened his.

“How do you do, my Catherine?” he asked tenderly.

“But this is a different sort of morning,” he reminded her archly, “the very first of our married life.”

She was lost in joyful contemplation of the doubtless unending succession of mornings that they would welcome together in perfect joy. As Henry then asked her what she thought of it, the answer required some explanation, which Henry then elaborated upon so eloquently that Catherine wished he might never stop. But upon their noticing with surprise that the sun was rising in the sky, much faster than it ever had been seen to do before, Henry considerately retired to his own room to prepare for the day, saying that he would send the maid to her, with a cup of chocolate.

The forenoon was spent in making a circuit of the parish. Henry introduced his bride to the parishioners and cottagers, all of whom made very much of her; and afterwards they retired to a survey of their own grounds, projecting plantings, and visiting the animals.

“It is the happiest day I ever spent,” Catherine declared, as they sat down to tea at their own table, spread with their own new china set, General Tilney’s wedding-present, which Catherine had not before seen.

He was a connoisseur in china, as in many other things, and Catherine could not but admire the delicate gold-and-white dishes and cups, in their prettiness and abundance, however empty was the sentiment behind the sending.

“Happiness is a very proper state in a new bride,” observed Henry, “and I may take the opportunity to tell you that I am happy, too. Upon my word, my father did us well! That is a set that might last us all our lives, even if we have as large a family as yours.”

Catherine blushed again at this reference, and then felt it ungracious to have a secret hope that using the china would not always make her think of the giver.

“The gold leaves are very pretty,” she said, taking up a cup. “I never saw any thing like these little symbols woven round the edges. Do they signify any thing, do you think?”

“I do not know. I had not observed,” said Henry, examining a saucer closely. “You are right, however, they look almost like letters, do they not?”

“Not in any language I ever saw. Is it Russian? Is it Hebrew? Is it Arabic?”

Henry squinted at length, and finally said, “No. I perceive they are English letters, but they are so very small, I do not think they can possibly be read without a magnification glass. We have not one here. I should have to send to Cambridge for such a thing.”

“Well, I wish you would. If there is some secret writing on our china, I should like to know what it says. Do you think your father knows about it?”

“Most certainly. My father does nothing without deliberation. And he had this china made up especially for you –he told me so, in the letter that accompanied it. I can’t comprehend what he means by this.”

“Perhaps the letters are a motto of some sort,” suggested Catherine. “My mother has a set of plates that have a blessing on them, and the words, Hunger is the Best Sauce.”

“Somehow I feel it is not that,” said Henry dryly.

The eyes of the young husband and wife met.

“’Tis very strange,” said Catherine. “Are you quite sure you cannot make out any words at all? I could not, but then I only know English.”

“It does not look like any thing else,” said Henry doubtfully, “it might be Latin, but so tiny…Does this look like the letter T to you?”

“But that does not mean any thing, Henry.”

“I cannot tell,” he said slowly, “but I think the letters may be written backwards. Then it could be – Maledict. No, surely not. I cannot make out any more.”

He put the saucer down, rather hard.

“That does not sound much like a blessing,” Catherine faltered.

The young couple sat silent, as they each thought of what the words might mean, and what was the opposite of a blessing.

“I suppose I must write to thank your father,” said Catherine reluctantly, “but Henry, I hope you will not take it amiss if I say I prefer not to use this set of china.”

Diana Birchall worked for many years at Warner Bros studios as a story analyst, reading novels to see if they would make movies. Reading manuscripts went side by side with a restorative and sanity-preserving life in Jane Austen studies and resulted in her writing Austenesque fiction both as homage and attempted investigation of the secrets of Jane Austen’s style. She is the author of In Defense of Mrs. Elton, Mrs. Elton in America, Mrs. Darcy’s Dilemma, and the new The Bride of Northanger. She has written hundreds of Austenesque short stories and plays, as well as a biography of her novelist grandmother, and has lectured on her books and staged play readings at places as diverse as Hollywood, Brooklyn, Montreal, Chawton House Library, Alaska, and Yale. Visit Diana at her Austen Variations author page, follow her on Twitter, Facebook and Goodreads.

The blog tour is just starting, so don’t forget to check out other blogs for more information on The Bride of Northanger.

6 responses to “The Bride of Northanger- Excerpt”