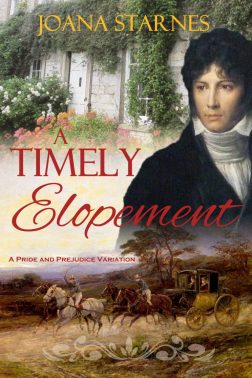 A Timely Elopement is the perfect summer read, it is a fast paced yet romantic story which is extremely well written and captivating.

The book is told from Darcy’s POV and starts with the well known Hunsford proposal, but the author stopped him from ruining the most perfect love declaration of all times, by having Colonel Fitzwilliam entering the Collinses’ parlour after the “you must allow me to tell you how ardently I admire and love you”.

The Colonel’s interruption is to announce that Anne has eloped with none other than Mr. Wickham, and I loved this premise because it allowed Elizabeth to know the truth about Wickham’s character before defending him before Darcy. I always dislike scenes where she does that, and I was happy to see the author prevented it from happening.

This unexpected elopement puts Rosings in an uproar and everyone travels to London to try to prevent the disgrace. Colonel Fitzwilliam and Darcy rush to find the runaway couple, and Elizabeth accompanies Lady Catherine who refuses to be left behind under the circumstances. The story will progress from there and will take us to London, Longbourn and even Pemberley in the epilogue.

A Timely Elopement is a very sweet story without the angst we are used to in this author’s books, but many of the traits we usually see in Starnes work are still present. It is visible she knows these characters like no one else. Both Darcy and Elizabeth remain true to themselves, and their traits are not exacerbated to make the story more interesting because the author is able to capture readers attention with well thought of scenes and riveting dialogues. Darcy and Elizabeth’s imperfections are not removed for the sake of the story, and Darcy learns along the way that his pride should be re-checked, and that his opinion of the Gardeners was far from the truth.

I found the beginning of this story very amusing, particularly the scenes with Lady Catherine, and that was a good starting point for what was coming ahead. The following chapters show us Darcy at his best, capturing Elizabeth’s heart by revealing to her how he is amongst family and friends, and even surprising her with his ability to flirt. Their scenes are like all of Starnes scenes, intense, romantic and swoon worthy. However, I would have liked to see more scenes that would allow me to feel Elizabeth falling in love with Darcy. There are several moments in his house and even at the Gardiners where we see her challenging her previous opinion of him, but I would have liked to see her developing more intense feelings for him throughout the story.

Towards the end of the book we get to see Darcy’s jealousy which was one of my favourite aspects of this book. Unlike other works from this author, this jealousy does not create much angst and is soon resolved, mainly due to Elizabeth’s wit, which was just perfect! I hate to see a silly Elizabeth misinterpreting everything that is said, and that never happens in this story due to the authors profound understanding of her character.

Summing up, A Timely Elopement is not the typical Starnes book but it is just as good as her previous releases. The book is extremely well written and captivates readers attention from the beginning until the end with its witty dialogues and romantic interactions. I highly recommend this one to all my readers, because as usual, Starnes’ talent does not disappoint.

You can find A Timely Elopement at:

Joana Starnes is kindly offering 2 ebook copies of A Timely Elopement to my readers. To apply to the giveaway all you need to do is comment on this post and let us know what you think of this new release. The giveaway is open until the 18th and the winners will be announced shortly after that. 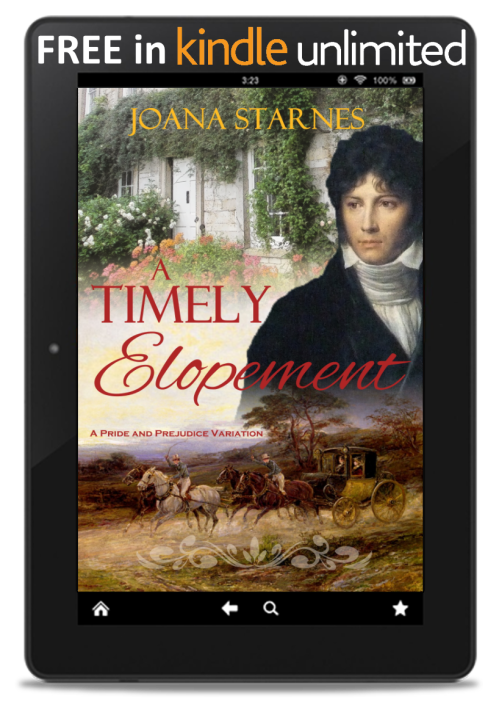 43 responses to “A Timely Elopement by Joana Starnes – Review & Giveaway”