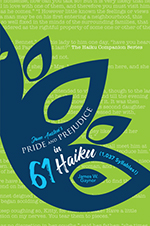 Today I’m welcoming for the first time at From Pemberley to Milton author James W. Gaynor to talk about his recently released book, Jane Austen’s Pride and Prejudice in 61 Haiku (1,037 Syllables!).

I didn’t know James W. Gaynor or the book before he contacted me, but the more I read about his career and his book, the more I wanted to talk to him and share all I was discovering with you. I was very interested in Haiku and delighted to see how it could be used on an Austen novel, but I will let you read all about it from James own words on the below interview.

I hope you find it interesting and that you are as captivated by Haiku as I was. This is certainly a new take on Jane Austen’s work and I’m glad to receive such a creative author in my blog. Thank you very much for visiting Jim!

James W. Gaynor, author of Everything Becomes a Poem (Nemeton Press), is a poet, artist, editor, and writer. A graduate of Kenyon College, he lived for years in Paris, where he taught a course on Emily Dickinson at the University of Paris, studied the development of the psychological novel in 17th century France, and worked as a translator.

After returning to New York, Gaynor worked as an editor at Grosset & Dunlap, Cuisine magazine, Scriptwriter News and Forbes Publications. His articles, book reviews, poems and essays have appeared in The New York Observer, OTVmagazine.com, The Gay and Lesbian Review Worldwide, and Peeking Cat Poetry Magazine.

As #HaikuJim, Gaynor publishes a daily haiku drawn from current newspaper headlines and is the creator of Can You Haiku? — a corporate communications workshop based on using 17th-Century Japanese poetry techniques to improve effective use of today’s digital platforms. Gaynor recently retired as the Global Verbal Identity Leader for Ernst & Young LLP.

A silver medalist in the 1994 Gay Games (Racewalking), Gaynor’s found-object sculpture has been exhibited internationally. He is a member of the Advisory Board of New York’s The Creative Center at University Settlement, a nonprofit organization dedicated to bringing the creative arts to people with cancer and chronic illnesses. (http://www.thecreativecenter.org/tcc/

Thank you so much for allowing me to interview you James, it is a real pleasure. I always like to know when authors discovered Jane Austen and how that happened. When was it for you?

I first read Jane Austen (P&P) when I was in high school (1965). Both my parents were Austen fans and by the time I started reading the novel, I had heard “It is a truth universally acknowledged …” quoted enough times to get the sense that I was in for something important. 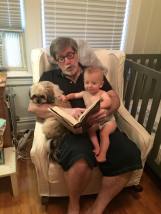 Gaynor reading to his grandson

That is quite interesting, I hope to one day impact my children the same way your parents did. So what caught your attention in her writing when you ventured into it?

I was too young to fully understand her message(s) in P&P when I first read it, but I did get that marriage and money were linked in ways that didn’t always have to do with romantic love. I also got the sense that she was warning me, somehow. Something I understood and appreciated much later in life.

It’s curious that you mention Pride and Prejudice  as that is many people’s favourite novel, is it yours as well?

P&P is tied with Mansfield Park for me. While Fanny and Edmund are not the most exciting of Austen’s leading characters, I was immediately fascinated by the fact the peace and order of Mansfield Park itself was supported by its darker reflection, Sir Thomas’s sugar plantation in Antigua. I didn’t read MP until I was much older and was stunned by that content (when Fanny questions Edmund about slavery).

From what I understand you’ve chosen one of your favourite Austen books and mixed it with Haiku, but I confess I’ve never heard about it before; can you tell us what is Haiku and how did you discover it?

Haiku are short, Japanese poems, which, in the English tradition, consist of three lines (5 syllables / 7 syllables / 5 syllables). There is something wonderful and powerful in the format. Children study them in grammar school here and adults always seem to respond to learning how to write them.

So, how did I start?  Well, in the early 80s, I experienced a somewhat predictable, spiritually deracinated-Westerner, child-of-the- 60s fascination with Zen Buddhism. I even flirted with the idea of becoming a monk. In that process, I also studied haiku, ikebana (flower arranging), and kendo (a martial art).

One of the things I came to love about entering the austere and beautiful world that embraces both Zen monks and their militaristic Samurai counterparts is that, yes, you’re supposed to be able to slice your opponent into 53 thin pieces with grace and a minimum of blood. But you should also be able to arrange flowers and write poetry. In the Yin and Yang of life, everybody is both an artist and a warrior. It’s up to you to create a coherent whole of your many dimensions.

I now mediate infrequently and in a chair.But for the past 30 years, I have maintained a daily habit of writing a haiku based on the content of both a sentence and the article in which it appears in the New York Times. — only I now give the classic syllabic pattern of 5 / 7 / 5 a slant tailored to my secular careers as a journalist, corporate communications dude, and poet. In fact, as #HaikuJim, I have a daily haiku that I post on my blog (jameswgaynor.com), and I write contemporary haiku commentary (usually humourous) for OTVmagazine.com.  I also teach a haiku workshop for corporate communicators called “Can You Haiku?”

And how can it be applied to Jane Austen’s Pride and Prejudice?

This book came out of my conviction that famous first and last lines of well-known novels are, in fact, short poems that we don’t recognize as such — and, as such, are not unlike haiku. In my work as a poet, I started a series of poems based on famous first and last lines in classic novels, and they’ve been well received. One of my poems “Dorothea Restructured” (based on the last line of Eliot’s Middlemarch) has had an active cyberlife and has appeared in several publications, including my own book, Everything Becomes a Poem (Nemeton Press).

When, inevitably, I turned my eye to Austen, I realized that the first line’s fame has, in a way, cast a shadow over all the other chapter first lines — and then I got curious about seeing what Austen was up to in the rest of her novel.

So, I created a summarizing word-image haiku of each of the novel’s chapters. I based this approach on my fascination with Austen’s mastery of the opening line, which she demonstrates in the first sentence of each of the 61 chapters, not only in the dazzling beginning of Chapter 1. And in the Notes section I’ve provided a more detailed analysis of the book’s action, based on the criteria established by answering the haiku’s What / Where / When questions.

What can readers expect from Pride and Prejudice in 61 Haiku?

It’s my hope that readers will find themselves smiling knowingly from time to time as they travel in this redesigned Japanese vehicle across Austen’s familiar English landscape — and that they will forgive my star-struck attempt at what is essentially one long love-letter-poem written to the extraordinary woman who still speaks to us in such modern ways.

I know you have lectured at Fordham University on how a poetic / haiku approach to the first lines of Pride and Prejudice can help readers to discover unexpected insights. Can you explain that to my readers as well? And what was the feedback from the audience?

I spoke at Fordham on how this approach can help readers to discover unexpected insights — and in so doing, provide an alternative to the wet-shirt Firth-Darcy version of P&P that has, in my opinion, unfairly dominated popular understanding of Austen’s clear, sardonic tone. And the students were excited about looking at the novel’s structure and action from a different perspective.

After the lecture, one young woman told me the Jane Austen we discussed was exactly the voice she needed guiding her love life — which confirms for me that, 200 years after her death, Austen continues to exert her subtle influence.

Do you have plans to apply Haiku to any other Jane Austen novel?

I’m not sure yet. I like the idea of tackling classics that wide audiences are familiar with, and opening up a door to different interpretations. I think the next book might be either The Iliad & The Odyssey or even the Bible. But, first things first.  I’ll have to see what the reaction to this book is.

But whatever the reaction, I’m deeply grateful to you for giving me the opportunity to talk about my book with you and your readers. Thank you!

Thank you so much for visiting today Jim, it was a true pleasure talking to you 🙂

James W. Gaynor would like to offer one paperback copy of Jane Austen’s Pride and Prejudice in 61 Haiku (1,037 Syllables!) to one of my readers. The giveaway is international and all you have to do is comment on this post until the 17th of November. Let us know what you thought about this original idea, if you have ever heard about Haiku before, or place your own questions to the author. I’m sure he will be happy to chat with you.

The winner will be randomly selected and announced on this blog shortly after the 17th. If you don’t want to miss the announcement, please follow From Pemberley to Milton to make sure you receive an email with this information as soon as it goes live.